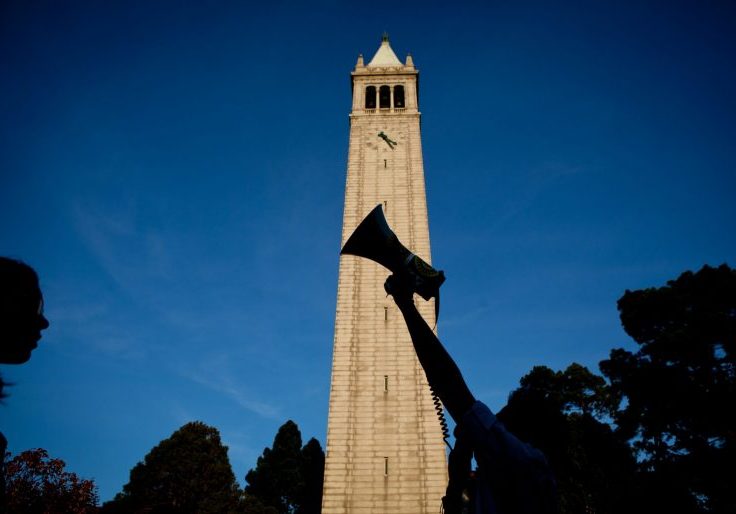 The complaint, filed last week by a Florida-based attorney and the International Legal Forum, a global watchdog that fights anti-Semitism, alleges anti-Israel and anti-Semitic prejudice at the law school after nine student groups in August passed that ban on Zionist speakers from campus.

The school’s decision to join the ban on pro-Israel speakers violates the Civil Rights Act of 1964, which prevents recipients of federal funds from discriminating on the basis of race and national origin, the complaint said. The petitioners are calling on the Department of Education’s Office of Civil Rights to immediately “open an investigation into the University of California, Berkeley, Law School” and order that this ban be lifted by Zionists.

The complaint comes amid a rise in anti-Semitism on American college campuses. Attacks on Jewish students and their identities doubled in the 2021-2022 school year, particularly in schools with large Jewish populations Free beacon reported last week. Last month, for example, at George Washington University, flyers reading “Zionists Fuck Off” were posted on the campus’s Hillel Building, a center for Jewish life. The Hillel Building at the University of Southern California was also defaced in August, with vandals destroying the front of the building.

The Department of Education must determine whether the Berkeley statute violates the Civil Rights Act and then force the university to “repeal the statute in question,” the complaint says. The watchdog also wants Berkeley’s leaders to ensure that any group supporting the anti-Zionist provisions is barred from receiving tuition and that its status as a “recognized student organization” is revoked. Students and faculty should also be required to attend training that promotes a campus environment “free from anti-Semitic harassment and discrimination,” the complaint said.

There is precedent for the Department of Education to interfere in the matter. The federal agency is leading an investigation into the University of Southern California over allegations that the school fomented “a hostile environment of anti-Semitism.” This investigation was launched after a monitoring group presented evidence of antisemitic discrimination similar to that contained in the Berkeley law complaint.

This was announced by a spokesman for Berkeley Law Free beacon that the school “endeavours not to comment” on complaints filed with the Department of Education’s Civil Rights Office. The spokesman also said he was unaware of the specific complaint.

While Berkeley Law officials, including Dean Erwin Chemerinsky, have attempted to downplay the issue, with Chemerinsky saying that “only a handful of over 100 student groups at Berkeley Law have done so,” attorneys find that excuse unacceptable.

“It is unfathomable that a similar statement would ever be made, that ‘just a handful’ of student groups banned speakers of other ethnic, religious or racial groups,” reads the complaint, which was written in part by Florida-based Gabriel Groisman Advocate and leader of Jewish rights. “Nevertheless, such blatant discrimination, aimed squarely at Jews, is excused, justified, and established. The position of the university is not legally tenable.”

The complaint further states that Chemerinsky “did not request either [the groups’] recantation, nor has he taken any meaningful action in response to this egregious act of discrimination.”

The August resolution sparked heated debates on the Berkeley campus and in the pro-Israel advocacy world. It states that nine officially recognized student groups “will not invite speakers who have expressed and continue to hold views or who host/sponsor/sponsor events in support of Zionism, the apartheid state of Israel and the occupation of Palestine.” The organizations use rhetoric commonly used by Israel’s enemies, including supporters of the anti-Semitic Boycott, Divestment and Sanctions movement, which is waging an economic war against Israel.

At the heart of the complaint is the allegation that these groups target Jewish and pro-Israel students because of their religious identity or national background. This “enforced exclusion” of predominantly Jewish students, the complaint states, “is unlawful and a flagrant violation of Title VI of the Civil Rights Act.”

“There must be no ambiguity: anti-Zionism is anti-Semitism,” the complaint reads.

“By effectively saying ‘Zionists are not welcome,’ this student group – and by extension Berkeley’s failure to act – excludes, marginalizes and silences Jews and contributes to the creation of a hostile environment for Jewish students, faculty , and staff, if necessary [where] Antisemitism, including on campuses, is already at record levels in the United States,” the complaint reads.

Groisman, the attorney who is handling the case with the International Legal Forum, said Free beacon that the formulation of Jew-hatred in the language of anti-Zionism will not prevent Berkeley from being investigated for discrimination.

“Federal laws are in place to protect students from discriminatory acts,” he said. “The student groups at UC Berkeley tried to be cute by hiding their discrimination against Jews by excluding Zionists.