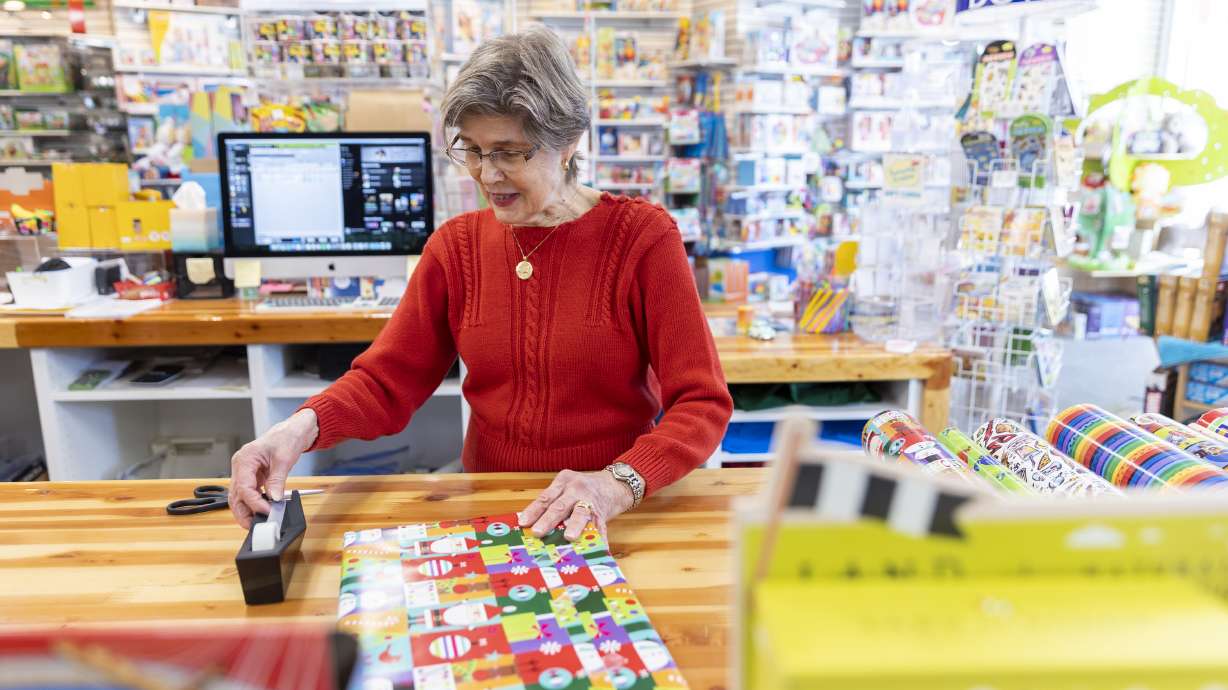 Diane Sartain, co-owner of Tutoring Toy, wraps a gift for a customer Monday in Salt Lake City. The last two years haven’t been overly cheerful for local businesses grappling with the pandemic and its aftermath, but things appear to be on the up this year amid slowing inflation and rising consumer sentiment. (Ben B. Braun, Deseret News)

SALT LAKE CITY – Walking through the doors of 34-year-old Tutoring Toy Shop is like entering a childhood dreamscape.

Bright lights alongside thoughtful displays showcasing every toy imaginable are enough to get everyone in the holiday spirit. However, the past two years have not been so merry for local businesses struggling with the pandemic and its aftermath.

“Things are really starting to get back to pre-pandemic levels. We’re not quite back yet, but the signs are all pointing in the right direction,” said Sartain.

Additionally, the National Retail Federation forecasts retail sales to be 6-8% higher than last year, and Gallup reported last month that Americans plan to spend more on Christmas gifts this year than in the previous three years.

One clue, he said, is the falling cost of shipping containers and trucks that retailers pay to ship their inventory.

“At its peak in mid-September 2021, the average rate for securing a 40ft container on a ship from Asia to the US exceeded $20,000. so a dramatic reduction in shipping costs,” Spendlove said.

Consumer sentiment in the Beehive State is actually trending up, rising to 66 in October from 63.9 in September, according to the Kem C. Gardner Institute’s Utah Consumer Sentiment Survey.

Both Spendlove and Sartain are urging Utahns to shop local this holiday season, with Sartain calling this time of year “our lifeblood.”

As a toy store owner, most of Sartain’s sales between January and September depend on birthday celebrations.

For this reason, the fourth quarter – the holiday season – is particularly important for Sartain and other local companies.

Shopping locally is also important to get the money flowing back into the community, something that doesn’t happen to the same extent when shopping online or from a major retailer.

“Seventy percent of the money spent in local businesses goes back to the community,” Sartain said. “For online retailers, for example, only 40% stay in the community.”

“And I would add that’s a lot more fun,” Spendlove said as he stood at the Tutoring Toy Shop, 1400 S. Foothill Drive.

Sartain said he often sees shoppers looking around the store in earnest and determined, frowning.

When they leave, chances are they’ll have a smile on their face.

“We always tell people, ‘Look, you don’t have to buy anything, just come in and let’s make your day better,'” Sartain said.

Logan Stefanich is a reporter for KSL.com covering the communities, education, economy and military of southern Utah.