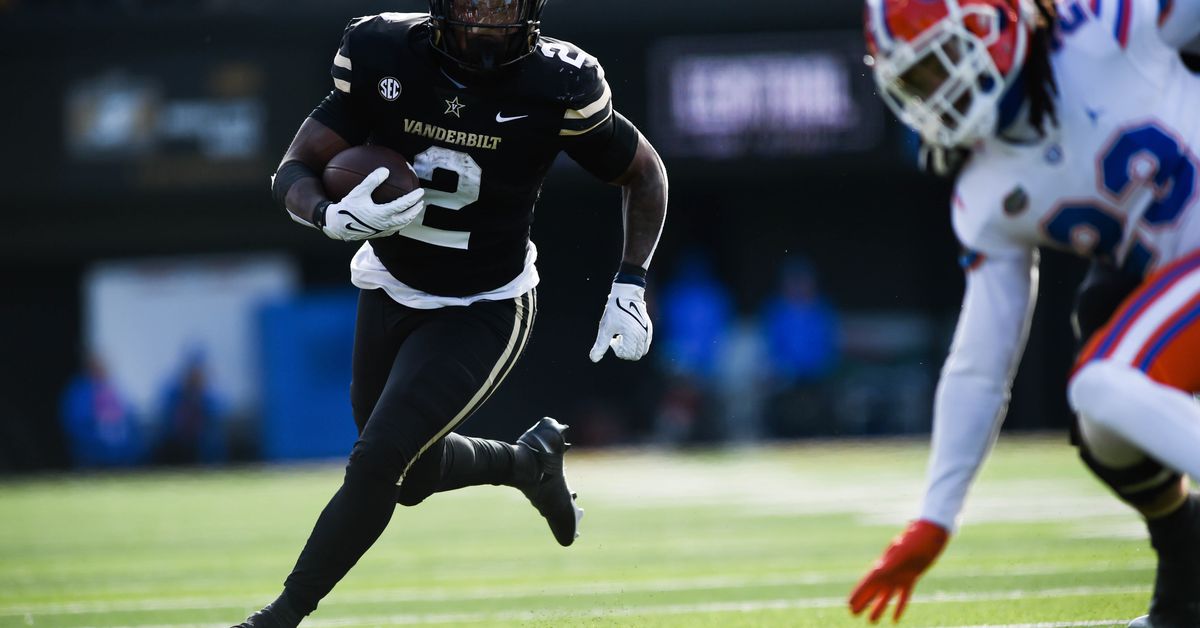 This may or may not be the article you are about to read. But like any loyal soldier, I trudge on to bring you the good news of hard numbers. This week, the No. 9 Tennessee Volunteers take on a rising team of Vanderbilt Commodores, the latter of whom are on their first SEC winning streak in…a while.

As we saw last week, numbers don’t mean much when the ball is kicked off. Yes, I can give you the best guess as to what the teams will look like. The systems did a good job of telling you who is going to win! But it’s a wild game, and sometimes it just doesn’t work out the way the numbers suggest. Like when a terrible offense has a legendary night out of nowhere…

That’s enough pessimism. Let’s look at the stats and see where these two teams fit together.

Tennessee’s offense is now the best in the country. Hm.

I wouldn’t throw those insulting numbers out the window. But I would add some pretty big asterisks. Hendon Hooker’s injury means systems can’t accurately gauge offense for this upcoming matchup. We just don’t have a good idea of ​​what it’s going to look like.

If I had to guess, I’d say Tennessee will try to run the ball a lot more against Vanderbilt. This can lead to mixed results. Vanderbilt hasn’t been good against the run, but their defense as a whole has performed better than usual over the past two weeks. Not surprisingly, they also faced two quarterbacks whose passing skills are questionable. That’s very true of Milton – but we also saw him hit some crazy deep balls.

There is a small conundrum in analyzing Vanderbilt’s offense. They wavered between two quarterbacks: AJ Swann and Mike Wright. Both are decent, but it’s Wright who has started in their two most recent wins. Swann was regularly injured.

What is evident is that the Commodores are happy to let it run. In their victories over Kentucky and Florida, they threw the ball just 39 times for 292 yards (good for a mediocre 7.4 yards per attempt). They had four touchdowns, but those aren’t as indicative of a consistent passing offense. So you’re not really trying to test opposing secondaries too much. That could change against Tennessee, and if so, I’d consider Will Sheppard a top target. He’s nabbed 54 receptions for 728 yards and an impressive nine touchdowns. He’s not one of those guys who’s just the best of a bad bunch. He’s quite a good player who would start on many SEC teams.

So if Vanderbilt is going to try to direct it, who will be hauling the stone? First up is running back Ray Davis. He’s one of the most underrated players in the SEC, and so far this season has 982 yards (4.7 yards per carry) and five touchdowns. If we assume that Mike Wright will be at the start, we will also see a lot of him on the ground. He was particularly effective against Kentucky when he rushed for 126 yards for 11.5 yards per carry. He has 467 total yards and five touchdowns on the ground this year.

That might come back and bite me in the street, but I really don’t think Vanderbilt will try to put the game on Wright’s arm. When he’s up against SEC competition, Wright’s numbers go way down and he looks duller. That’s not the sign of a quarterback just waiting to burst onto the scene as a prolific passer. However, I think he could have a real impact as a runner.

I’ll try to restrain myself as I analyze Tennessee’s defense.

Put simply, they refuel. South Carolina’s poor offense earned them 63 points. The week before, they surrendered at 24 in the first three quarters to a similarly struggling Missouri offense. A week before that, they let Georgia have the best deep-passing day the Bulldogs had all season. No one saw Saturday’s collapse coming. But the leaks had started to spring in the last three games.

The defense is getting worse and worse because the opposing teams realize how weak they are in the secondary. The drop in the rating system this week is well deserved, and I have a feeling the Vanderbilt game will continue that trend.

I take that back. Compared to their defense, Vanderbilt’s offense is much clearer. I really don’t know what to think of the Vanderbilt defense given the results of the past few weeks.

On the one hand, Vanderbilt as a whole has no quality defense. This was especially true of their run defense, which began to be bullied as soon as the SEC game started. Each of Alabama, Ole Miss, Georgia, South Carolina and Kentucky recorded over 5.0 yards per carry against the Commodores. The only team not to do so was Missouri, who recorded just 2.4 yards per carry. But that could have been some kind of coincidence, since the odd Brady Cook-led Missouri offense leads to negative plays. The leading rusher for Missouri — Cody Schrader — actually had a decent game of 14 rushes for 84 yards (6.0 yards per carry).

But then, out of nowhere, the Commodores came out and ended the Florida Gators’ run game. This was particularly bizarre given that Florida had arguably the best running offense of any team listed to date. They ran it 21 times for just 45 yards! That’s 2.1 yards per carry! I’ve seen a few cut-ups of this game and as far as I can tell Florida’s offense was just having a bad day. Anthony Richardson got some wrong readings, Vanderbilt loaded the box and Florida was downright unlucky.

There really isn’t much of a difference between their pass defense and their run defense. I’m very interested in seeing Tennessee attack them. If Milton is proficient in the reading options game, there will be some gaping holes for the volunteers to exploit. I could also see Vanderbilt charging the box and challenging Milton to consistently make deep passes. These will also be open – but it will be much more difficult if Hendon Hooker is not in the middle. Overall just a really weird defense to try.

The offensive line actually held up quite well. It’s hard to look closely when a team has to pass constantly to avoid being blown out, but the Volunteers’ offensive line passed the test with flying colors nonetheless. They were the best unit in the team last Saturday. That Vanderbilt defensive line isn’t great, so barring a mental breakdown, Tennessee’s offensive line should continue to perform well. No guarantees on sack rates when Joe Milton is in the bag for six seconds.

Let’s get that out of the way: The Tennessee defensive line had an unusually bad game against South Carolina. That came out of nowhere. They had some small weaknesses but not what we saw on Saturday. The defensive ends couldn’t save Spencer Rattler even with one of the worst pedestrian protection units in the country to save her life. It was unfathomable. To make matters worse, South Carolina ran with decent success, although they missed their best running back at MarShawn Lloyd. Part of that is clearly the linebacking unit for Tennessee that Jeremy Banks is missing. But very few linemen won their matchups on Saturday. I’m almost ready to throw it away as a freak result because it was so unusual.

129th in yards per carry is a pretty good indication of where Vanderbilt’s strengths lie. Put simply, they don’t feel comfortable passing off as a win. On the other hand, their running game is actually pretty decent. They have a top 50 standard downline yards per carry and their power success rate is admirable.

They’re actually a lot better defensively than I thought. They have pretty average overall grades, but then you get to the power success rate and the stuff rate, where they actually do very well. However, this pass rush is not good.

Keep in mind that the systems cannot account for injuries. The hooker’s absence would change the stated percentage significantly.

This suggestion is grossly unscientific and I don’t consider it a serious analysis – but if I tried to manually adjust the numbers I would reduce the above percentages by about 20-25%.