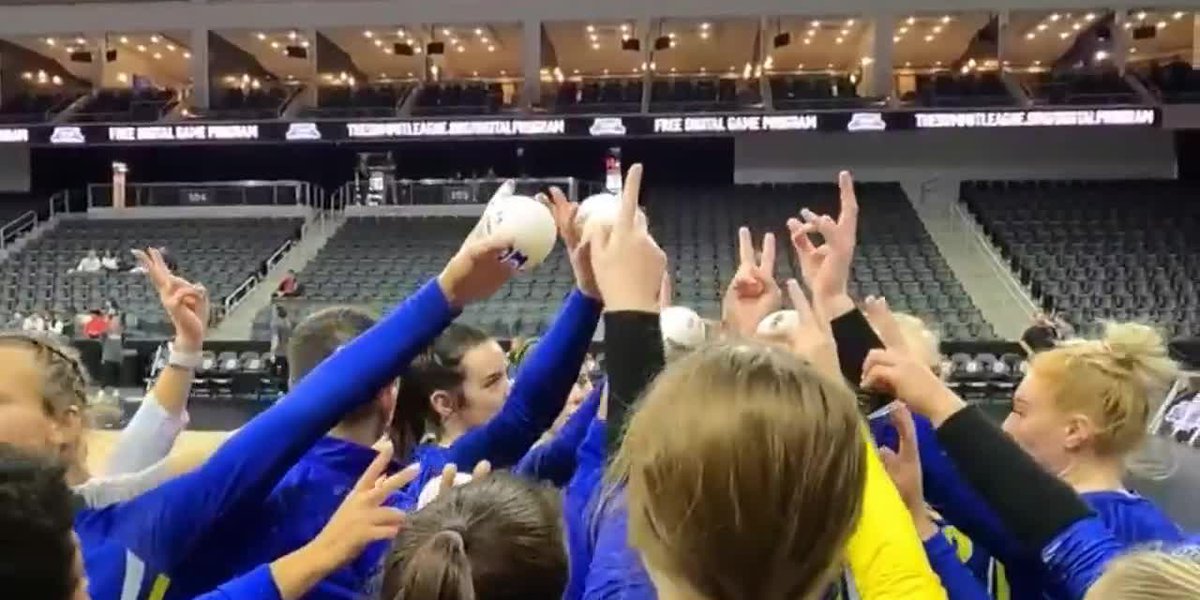 OMAHA, NE (Dakota News Now) — South Dakota State Volleyball ended the 2022 season with a hard-fought five-set loss to No. 4 Denver Thursday night in the quarterfinal round of the Summit League Postseason Tournament.

The competition, a repeat of last season’s tournament semi-finals, featured 54 draws and 20 lead changes in the five sets. Two sets needed extra points to determine a winner, and neither game was won by more than three points.

Crystal Burk racked up 25 kills in her last match as a Jackrabbit, two shy of her career best. The fifth-grader’s 95 attacks is not only a career high, but also the best single-game mark this year in the nation.

Setter Raegen Reilly also had a night for the record books. With 51 assists against the Pioneers, Reilly surpassed the 2,000 career assists milestone to become SDSU’s single-season assists leader for the 25-point Rally era. She ends her second campaign with 1,228 helpers.

On the defensive end, Jadyn Makovicka went against the Jacks with 28 digs, her most in a jackrabbit uniform and three fewer than her career-best overall. Alia Schlimgen added 16 digs, which is her career high, followed by 12 digs from Katie Van Egdom, 11 from Burk and 10 from Reilly. Makovicka and Faith Saewert each recorded an ace.

Denver received 32 kills from Hailey Green and 22 more from Memphis Glasgow. Emma Ziegler had 68 assists and Gianna Bartalo had 40 digs.

The Pioneers took a 4-0 lead in the opening set, but SDSU bounced back with five straight points to lead 5-4. After a three-point run by SDSU to a 10-8 lead, neither side scored more than two consecutive points for the rest of the sentence. The marathon set eventually ended at 32-30 with an ace of serve from Makovicka’s hand.

Set two was also hard fought until the Pioneers used an 8-0 run to take a 23-17 lead. SDSU pulled back to two at 24-22 before Hailey Green finished it off with a kill for Denver.

Despite being down 17-10 in the third set, SDSU rebounded to retake the match lead with a 26-24 win. Seven down, Andrews grabbed back-to-back kills to make it a five-point game, then the Jacks drew with the help of kills from Winter and Scheierman at 18-16 within two. Scheierman, Burk and Thompson laid down back-to-back kills to even the set at 21, then kills from Burk and Scheierman gave the Jacks the win again.

Neither side could pull away in the fourth set. A 7-2 stretch for the Jacks gave them a 16-12 lead, then Denver came back to tie the set with a run of their own at 17. With the set tied at 19, Denver’s last six points came by kill to force the tiebreak game.

Denver took a 7-4 lead in the final set and fended off the Jacks the rest of the way. Thompson pulled in a kill against their all-drawing SDSU within one at 10-9 before the Pioneers pushed to end the match 15-12.

SDSU finished the season 17-14 overall. Denver (19-11) is advancing to take on No. 1 South Dakota in Friday afternoon’s semifinals.