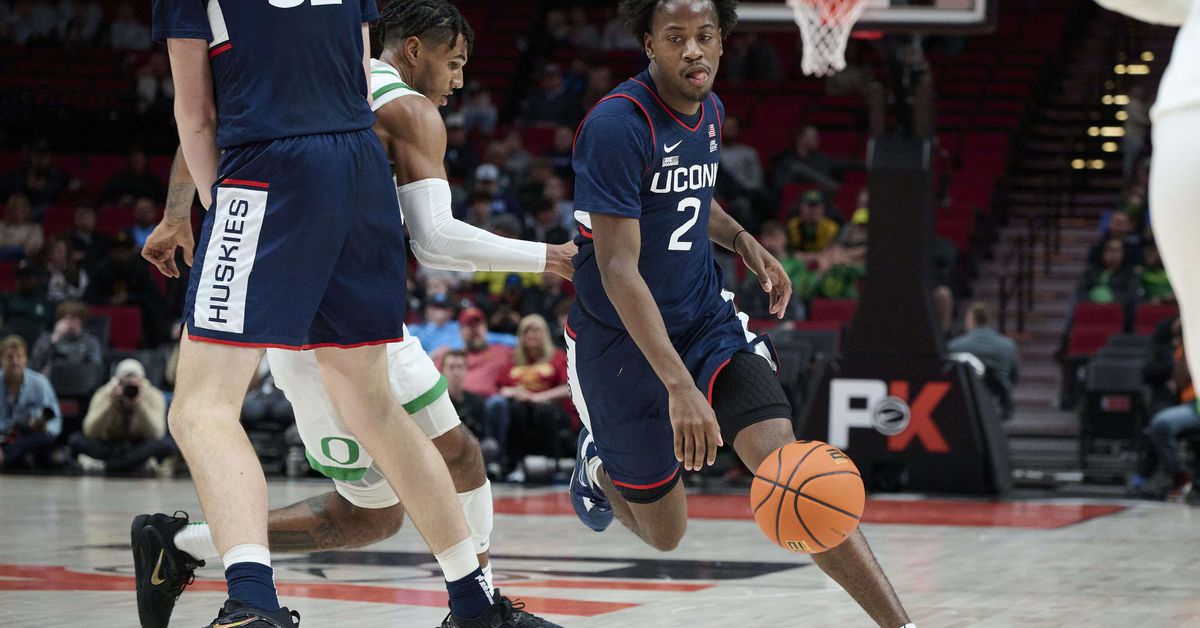 UConn’s No. 20 men’s basketball started the Phil Knight Invitational tournament as well as anyone could have wished for, defeating Oregon, 83-59, on Thanksgiving night.

Tristen Newton was the star of the first half. The ECU transfer was 5-5 of three as he picked up 19 points in the first half on his way to 23 points, 6 assists and 4 rebounds on the night.

The Huskies and Ducks traded shots early and were close early until consecutive threes from Jordan Hawkins, Joey Calcaterra and Newton took the lead to 10. UConn held the Ducks at bay with tenacious defense and Newton’s hot punch.

Calcaterra provided a goal boost off the bench with eight efficient points, including two threes, in the first half as he ended the night on 11 points. He helped close the gap from Andre Jackson, who struggled early, missing all three of his field goal attempts and his two shots from the foul line.

Hawkins also started from all over the court, hitting two threes on seven tries in the first half as UConn went 11 points clear at the break.

In the second half, the Huskies picked up right where they left off. Hawkins fired three shots from long range in the first five minutes and got the Huskies up by 18, and they never looked back. Hawkins finished with 18 points.

Donovan Clingan also did incredibly well in his first action against top-flight competitors. The freshman led the team in rebounds as he finished with nine points, eight boards, two assists, two steals and four blocks. He showed great tenacity at depth, changing countless shots and holding his own against Oregon’s extremely talented front line. Clingan’s play also allowed Hurley to keep Adama Sanogo on the bench for a long time due to foul problems.

Sanogo finished with an efficient 12 points and six rebounds in 23 minutes. He continued to show his improved shot, hitting two three-pointers to bring his young-season total to six.

While three-point shooting was a welcome sight, UConn’s defense was also phenomenal for much of the game, especially against Oregon’s lead guard Will Richardson, who finished with nine points on 3-9 shooting. UConn’s guards swarmed the half-court, stepping in front of pass lanes and generating ball pressure at every level, resulting in seventeen turnovers in Oregon. The Huskies also won the rebound fight 36-30, which is particularly impressive given that the Ducks rank in the top 25 nationally in terms of rebound margin.

UConn is back in action Friday night, taking on the winner of Michigan State and Alabama at 9:30 p.m. ET.