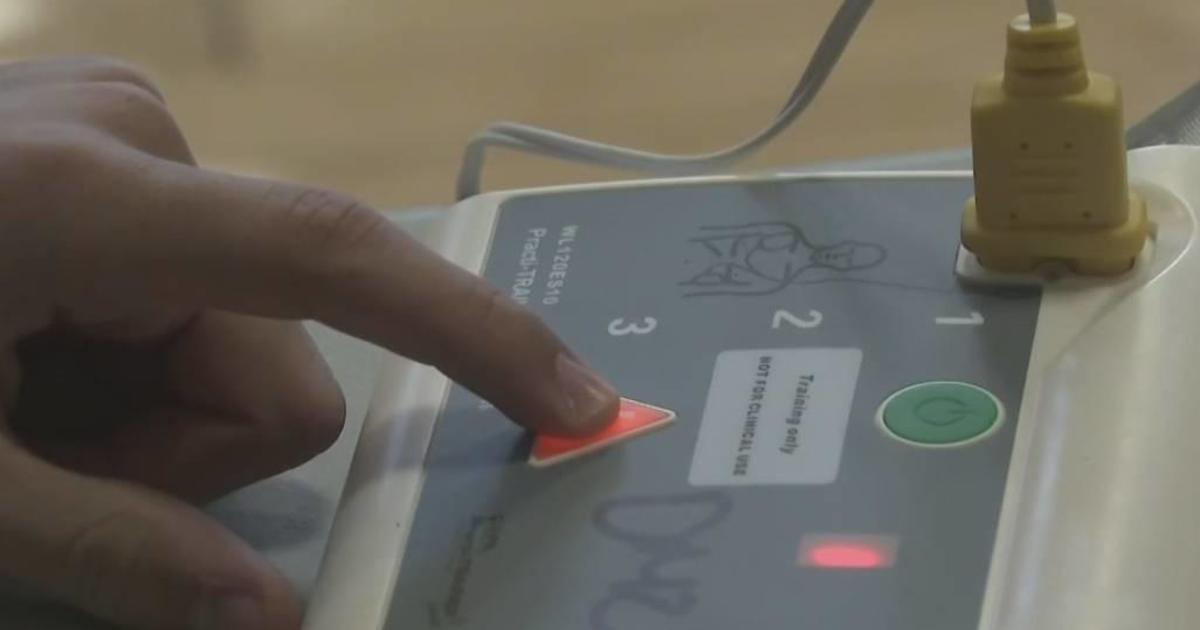 NEW YORK — In New York, the law requires schools to have an automated external defibrillator, or AED, if a person has heart problems. But it does not apply to private schools.

A mom is on a mission to make sure every school has this life-saving kit, CBS2’s Alice Gainer reported Monday.

Seventh and eighth graders at Resurrection Ascension Catholic Academy in Rego Park, Queens, learn CPR and how to use an automated external defibrillator.

Volunteers from the Dominic A. Murray 21 Memorial Foundation provide the training.

“He was the most genuine, loving, charismatic and athletic young man,” said Murray-Nyack. “No one knew immediately what to do. No one started CPR right away. The AED was not used until ambulance arrived.”

Murray-Nyack’s Foundation educates and trains others with the ultimate goal of prevention.

“We were more than happy to donate an AED to the school,” said Murray-Nyack.

Private schools in New York are not required to have AEDs, but a change introduced in the New York City Council would change that and also make them mandatory in police cruisers.

“It’s a sensible bill,” said council member and bill sponsor Rafael Salamanca Jr. “Now that we’re done with budget season, I’ve received a commitment from the Health Committee Chair to give this bill a hearing.”

In a sudden cardiac arrest, the heart’s electrical system fails. It stops beating and time is critical. counting seconds.

“That’s what this defibrillator does. It puts the heart back in sync so the electrical signal goes back to normal,” said Dr. Eric Fethke, a pediatric cardiologist.

Murray-Nyack’s son was medically cleared to play collegiate sports. Until the autopsy, no one knew he had a congenital heart defect. His father died of a fatal heart attack three years earlier.

Schools, public and private, must educate families about the signs, symptoms, risks, and prevention of sudden cardiac arrest.

“It’s part of every pre-competition sports package, every permit slip,” Murray-Nyack said. “The child needs to fill out heart health forms just like their parents do.”

Dominic’s Law states that any student showing signs of increased risk of sudden cardiac arrest must be barred from athletic activity until cleared by a licensed physician.

“Dominic passed the torch to me and I’m finishing the game for him that he started 13 years ago,” Murray-Nyack said.

She lost her only child and wants to make sure no other parent goes through the same thing.

Alice Gainer joined CBS2 in January 2013 as a reporter and host. She reports on breaking, feature and general mission stories.