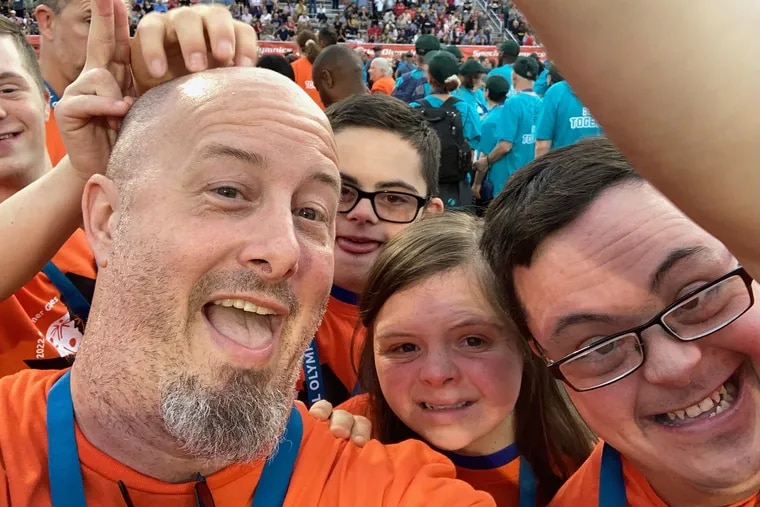 William Scully, 49, of Stratford, NJ, a popular aide, trainer and Army National Guard veteran, died November 15 after being hit by a car on I-295 in Mount Laurel.

Mr. Scully was driving south on 295 when an automobile accident forced him onto the shoulder of the highway. As he got out of his car, he was hit by another vehicle. Mr. Scully was taken to a local hospital, where he was later pronounced dead.

Born in Lindenwold to Bud and Cheryl Scully, Mr. Scully graduated from Overbrook High School and began working as a teaching assistant at Archway School for children with disabilities. He eventually earned a bachelor’s degree from Thomas Edison State University and then took a position as a teacher at Archway in Atco. Working with children with behavioral problems was a natural fit for him.

Later, Mr. Scully got a job at Lindenwold Middle School. He later earned a master’s degree from Rowan University and transferred to Sterling High School in Somerdale, where he has been a counselor and volleyball coach for the past 16 years.

“I can’t say enough about what he has meant to Sterling High School,” Sterling Superintendent Matthew Sheehan said of Mr. Scully in a video sent to the high school community. “I don’t think you could find anyone who had anything bad to say about him.”

Beyond the school, Mr. Scully’s influence has been felt through his volunteer work in communities across the region. He spent years coaching for Tarkill Soccer Club, Stratford Athletic Organization, Deptford Soccer Club and the Special Olympics of New Jersey. He also founded the Challenger baseball and football leagues in Stratford for children with physical and mental disabilities.

When Mr. Scully and his wife Nancy found out that their daughter Erin had Down Syndrome a week before she was born, Nancy Scully was initially devastated. But Mr. Scully “wasn’t even concerned,” Nancy Scully said. Together they surrounded Erin with love and opportunity and brought the entire community to life with their work.

Mr. Scully was a sweetheart, said Nancy Hennefer, a longtime volunteer at the local nonprofit Bringing Up Down Syndrome and a friend of Mr. Scully for 15 years. Just a few weeks ago, they were working together on a BUDS hay drive, where Mr. Scully did what he always does — come in and say, “What can I do to help?” (He ended up putting out smores for the big crowd together.)

Coaching people with disabilities isn’t for everyone, Hennefer said, but Mr. Scully was a natural.

“Everyone has unique skills, everyone has different levels of understanding, but he was able to reach each and every one of them in his own way, motivate and teach them and connect with the parents. He impacted everyone’s life.”

Mike Bonanno and Mr. Scully coached football together for Deptford Soccer Club for 13 years. Tempers can get hot in youth sports, but never with Mr. Scully.

“Never has he raised his voice to anyone I’ve ever heard — he was the voice of reason on our team, the heart and soul of our team,” Bonanno said.

Mr. Scully found genuine joy in helping others and lived to help others, in ways big and small. For example, when a tree crashed into a neighbor’s home, he ducked into his Stratford garage, came out with a chainsaw, and climbed onto the neighbor’s roof to clear the debris himself.

When he saw a need he could fill, he did it, often silently. Nancy Scully is a special education teacher at Audubon, and after learning that one of her students wanted to play sports at school but couldn’t do it without a helper, Mr. Scully advocated it despite his busy schedule.

“He always helped,” Nancy Scully said of her husband. The two celebrated their 24th anniversary on Sunday.

Family was everything to Mr. Scully, the center of his world. He loved being a father. He was a devoted son and brother and a loving uncle. But he also had other interests.

Mr. Scully spent 20 years in the Army National Guard, rising to the rank of Sergeant First Class and dedicating weekends and weeks of summer to his country. He enjoyed weightlifting and loved kayaking and spending time on the shore. He was hands-on and always found projects around the house. He was a Christmas fanatic and was shooting Christmas music the day after Halloween.

In addition to his wife and children, Erin, Jake, and Ryan, Mr. Scully is survived by his parents, grandfather William Brougham, brother Rick, and sister Kami.

Services were held on November 21st.