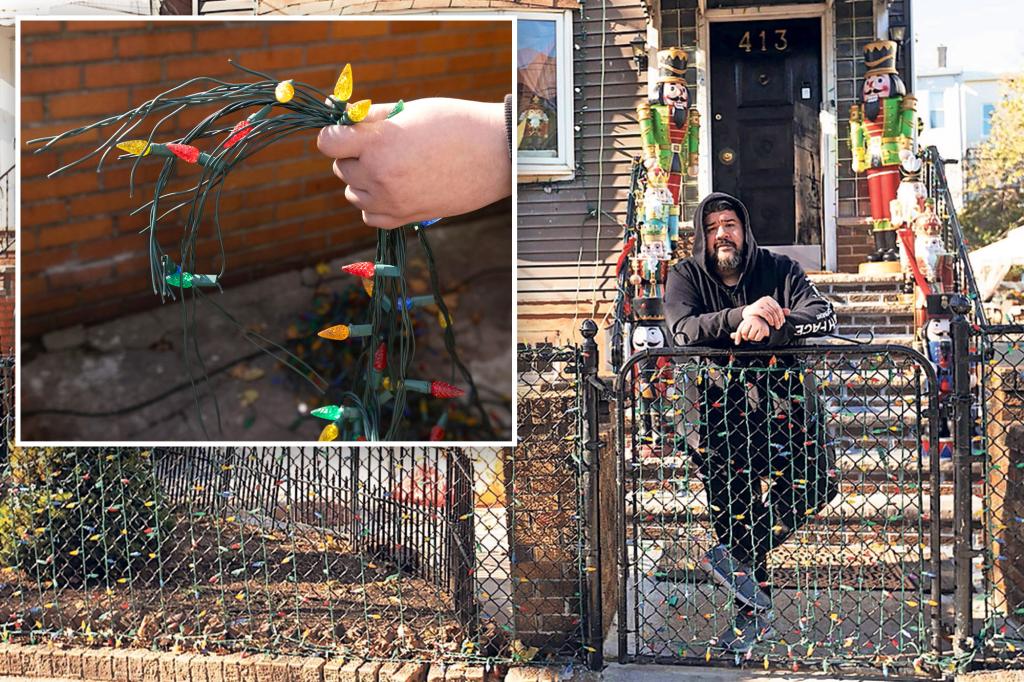 A heartless Scrooge really has his eye on a family in New Jersey.

An award-winning Christmas light in a Jersey City home was vandalized twice in the past week – threatening to ruin the Christmas spirit in the Garden State neighborhood.

“I never thought anyone would try to turn off the lights because they made everyone happy,” lamented homeowner Edward Roman. “I’ve never had a complaint.”

Roman and his husband Anthony take several weeks each year to decorate their home on New York Avenue in Jersey City with an elaborate LED light display. However, progress on this year’s installation was delayed when a Grinch turned out the lights last Tuesday night.

“My husband went to work around 5:30, 6 [a.m.], and noticed our gate was open,” Edward explained to The Post on Tuesday. “I had the lights on a timer and they didn’t come on on Wednesday.”

Just a few days later, he went outside to find the wires had been cut a second time.

He said the constant vandalism nearly crushed his Christmas spirit, but in a Christmas miracle straight out of a movie, his neighbors’ support prompted him to keep going.

“I just wanted to give up,” he said. “But then I was outside and the neighbors started talking to me. The lady next door was crying, ‘I love these lights, they make my grandkids so happy.’ Another neighbor across the street offered me her security camera for free.

“I never thought so many people would like or appreciate the lights.”

Roman said he and his husband started the annual decorating project in 2019, the year of their wedding, but took their post-COVID efforts to a new level.

“We thought let’s just grow bigger because everyone was so lonely from having to spend the holidays alone,” he recalls. The couple have since won Hudson Media Group’s Best Christmas Decorated Home competition three years in a row.

Roman doesn’t think the vandalism is related to competition. “I don’t have bad blood with anyone,” he said. “Three houses win every year.”

A GoFundMe set up by a friend of the couple to help them replace the lights — some of which cost more than $300 — quickly surpassed their $1,000 goal. Roman said he plans to use the additional donations to help people who don’t have their own Christmas lights.

“I donate my older lamps to people,” he explained. “I tell everyone, ‘Hey, people don’t like Christmas, they don’t like those lights, you put lights on too!'”

Armed with a security camera installed on Monday, Roman is determined to get “bigger and better” this holiday season. The perpetrator or perpetrators remain unknown, but he can have peace of mind knowing he has the support of law enforcement as well.

“The police response was amazing,” he said. “They followed me on Monday and I met a detective in person [on Tuesday]. You have done everything for me.”

While Roman regretted that the vandal messed up his decorating plans, he vowed that everything would be ready after Thanksgiving.

“By December 1st, the music will be playing and the lights will be on,” he explained. “If you didn’t like it [the display] First you won’t like it now.”

Roman had only one message for the vandals. “You can keep trying, but you won’t stop Christmas,” he said. “Not this year!”