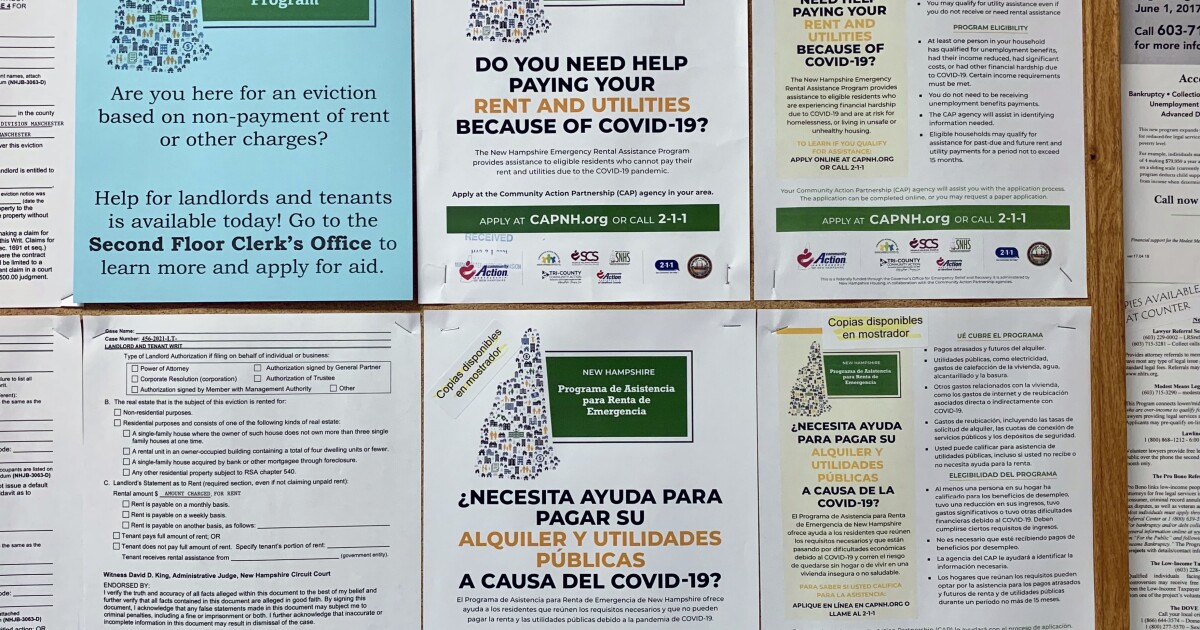 This story was originally produced by the New Hampshire Bulletin, an independent local newsroom that allows NHPR and other media outlets to republish their coverage.

New Hampshire’s rent relief program ended due to a lack of federal funding, McNamara wrote, and some of the recipients were on the verge of losing their housing. Many of the residents who received rent assistance had been placed in hotels paid for by the rent relief program. Now those residents would likely be kicked out, he wrote.

“These individuals are understandably concerned about where they will go next given the lack of options available,” McNamara wrote in the Nov. 9 letter reviewed by the Bulletin.

The situation would also have financial implications for cities, McNamara added. If no action were taken, cities would be required by state law to find funds to meet residents’ housing needs themselves.

“Communities will quickly find that their local welfare budgets are inadequate to meet these needs,” McNamara wrote.

The state responded last week. New Hampshire officials will allocate $20 million in federal COVID relief funds to help hundreds of homeless people stay in hotels through the winter after the Joint Legislative Fiscal Committee approved the $20 million request on Tuesday approved Friday. The spending was approved by the Executive Council on Tuesday.

The $20 million approved by the Finance Committee is available to all hotel residents who applied for rent relief before Oct. 21, the day the state froze new applications. Those who are staying in hotels but did not have an application in the pipeline before Oct. 21 are not eligible, according to Chase Hagaman, deputy director of the governor’s office for rent relief and recovery.

According to the state, the $20 million will fund renters’ hotel stays through June for renters with children and through April for individuals and renters without children. The state will “encourage” those hotels to use the extended aid to house the families over the winter, according to the proposal sent to the committee.

How many will benefit from this is unclear. According to a report by the Granite State News Collaborative, an estimated more than 700 people on rental assistance stayed overnight in hotels in September due to a lack of available lodging. The state has not released accurate totals for November.

And the money approved will be limited to people living in hotels; it does not help tenants who receive the rent subsidy but live in rented accommodation. New Hampshire’s rental assistance program is scheduled to end on December 29, according to Sununu.

“It looks like $20 million will be a big help. But it doesn’t do much for the many, many people who can’t afford the rent the ER Rental Assistance Program paid for them.”

“It looks like $20 million is going to be a big help,” Elliott Berry, the recently retired housing project director for New Hampshire Legal Assistance, said in an interview. “But it doesn’t do much for the many, many people who can’t afford the rent that the ER Rental Assistance Program paid for them.”

But housing advocates say the $20 million is a useful step nonetheless.

“We are pleased that (the Fiscal Committee) has approved additional funds (American Rescue Plan Act) to accommodate people currently staying in hotels and motels during the cold winter months and we urge the Executive Board to consider this time-sensitive issue as well.” to support,” Housing Action New Hampshire, a nonprofit organization, said in a statement Friday.

The approval comes as the New Hampshire rental market could face further turmoil.

The state last month announced a likely end to its rental assistance program after the state’s funding was withdrawn by the US Treasury Department in October. This month, New Hampshire Housing, the state agency that distributes housing support funds, announced that it was freezing the rent reduction application process, citing an apparent lack of additional federal funding.

After the funding collapsed, affordable housing groups and rights organizations pushed Sununu and Taylor Caswell, director of the Governor’s Office of Emergency Relief and Reconstruction (GOFERR), to propose a transition plan to help those who were in need of the rent reduction.

The pressure began with a Nov. 1 letter to Sununu from a coalition of organizations across the state, including representatives from Housing Action, Families in Transition, ABLE NH, Waypoint and a number of mayors and members of the Electoral Committee.

Organizers said that of all rental assistance recipients at risk of losing support, those living in hotels due to a lack of options would suffer the most – and should be prioritised.

“Households struggling with economic hardship, medical crises, substance use disorders or a history of domestic violence face an extremely tight rental market with high monthly costs, long waiting lists and very few options,” the letter reads. Providing additional funds during the winter would give them more time to figure out those options while avoiding difficulties during the winter, proponents noted.

A week later, Lebanese Mayor McNamara sent his letter addressing the end of funding for hotel residents and claiming that many hotels were already asking program participants to leave the hotel. Should the families lose their homes, the city would be required to provide RSA 165 benefits, McNamara noted.

He also pushed to secure a meeting between Caswell and other New Hampshire mayors.

In an interview, Hagaman pointed out other services available to people in hotels. On Friday, the Finance Committee also approved $3.3 million in state emergency rental assistance funds to be used for wrap-around services and case managers to find housing for displaced tenants and to incentivize landlords to hire renters rent for lower income.

“I don’t think every family uses these services, but they are there for those who need them, who want them,” Hagaman said.

Accurately estimating how many people currently live in hotels is difficult given the fluctuations in people’s situations, Hagaman said. But he said $20 million should cover the families whose applications are currently being processed. And he said the state deliberately chose a June deadline so families with children could keep their children in their local school district throughout the school year, and an April deadline so those without children could get through the winter.

Without a withdrawal of funding from the Treasury Department, the state is limited in what it can do, Hagaman said.

“It’s essentially looking at the funding that we have right now and seeing how far it can go,” he said.

After two years of spending, the state currently has about $100 million left over from the original $1.2 billion under ARPA, Hagaman said. “That’s the downside of getting closer to the end of the funding available: now you’re figuring out what the priorities are,” he said.