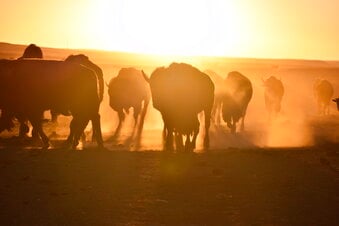 “We wanted to populate the western half of the United States because there were so many people in the east,” US Secretary of the Interior Deb Haaland, the first Native American cabinet member, said in an interview. “They wanted all the Indians dead so they could take their land from them.”

The reasoning at the time, she added, was, “If we kill the buffalo, the Indians will die. You will have nothing to eat.’”

The day after the bison were transferred from the Badlands, Heinert’s son TJ had his rifle trained on a large bull bison in the Wolakota Buffalo Range. The tribal enterprise has restored approximately 1,000 bison in just two years on 28,000 acres (11,300 hectares) of rolling, scrub-covered hills near the Nebraska-South Dakota border.

The 28-year-old had been talking all morning about the need for a perfect shot in 40 mph winds. The first bullet hit the animal in the ear, but it lumbered away a few hundred yards to join a larger group of bison, with the hunter following in an all-terrain vehicle.

After the animal had finally fallen to the ground, Heinert drove up close and held the rifle behind its ear for a shot that stopped its thrashing.

The Rosebud Sioux strive to expand the reservation’s herds as a reliable food source.

Others have bigger visions: The Blackfeet of Montana and tribes of Alberta want to create a “bordering herd” that stretches across the Canadian border near Glacier National Park. Other tribes suggest “Buffalo Commons” on state land in central Montana where the area’s tribes could harvest animals.

“What would it be like to have 30 million buffalo back in North America?” said Cristina Mormorunni, a Métis Indian who has worked with the Blackfeet to restore bison.

Haaland said there was no turning back – too many fences and houses. But her agency has become a major source of bison, passing more than 20,000 to tribes and tribal organizations over 20 years.

Transfers sometimes raise objections from ranchers who worry that bison will carry disease and compete for grass. However, demand from the tribes is growing and Haaland said transfers would continue. That includes about 1,000 bison transported this year from Badlands, Grand Canyon National Park and several national wildlife refuges.

Back in the Wolakota Range, Heinert sprinkled chewing tobacco on the back of the bison he had just shot and prayed. Then the half-ton beast was hoisted onto a flatbed truck for the bumpy ride to ranch headquarters.

About 20 adults and children gathered as the bison was lowered onto a tarpaulin.

“This relative gave himself to us for our sustenance, our way, or our life,” said tribal elder Duane Hollow Horn Bear.

Soon the tarpaulin was covered with bloody footprints from people who butchered the animal. They quartered it, sawed through bones, and then sliced ​​flesh from the animal’s legs, rump, and huge hump. Children, some as young as 6, were given knives to cut off skin and fat.

Katrina Fuller, who helped with the slaughter, dreams of training others so the reservation’s 20 communities can come to Wolakota for their own harvest. “Maybe not now, but in my lifetime,” she said. “That’s what I wish for everyone.”