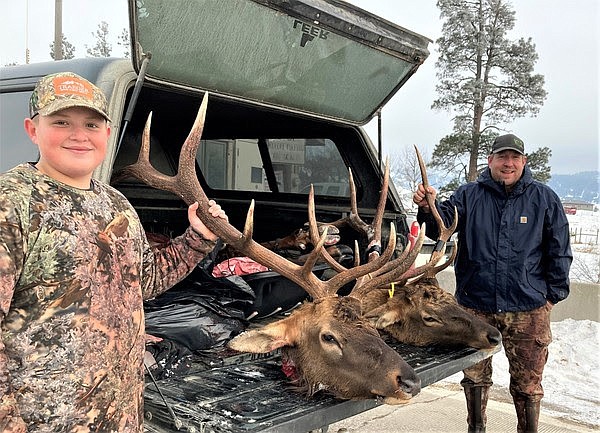 The moose harvest for Region 1 continues to be ahead of last year as the general big game season in Montana enters its final weekend.

More than 7,300 hunters have turned up at wildlife control stations across northwest Montana so far this season, according to Montana Fish, Wildlife and Parks. The total number of elk hunters has increased compared to last year, while the number of deer hunters has decreased.

54 moose were caught in the area, 28 are from the US 2 control station west of Kalispell.

The whitetail deer harvest for the region was 553, down from the 697 reported at this time last season.

Olney Control Station leads the region with 10.8% of game hunters.

Control stations are open on weekends during the general deer and elk hunting season from 10:00 am until approximately 1.5 hours after sunset. Regional stations are at US 2 west of Kalispell, Montana 83 north of Swan Lake, Montana 200 west of Thompson Falls, and US 93 near Olney.

While the general hunting season ends after this week, hunters still have options well into winter. Elk hunting opportunities continue to exist in certain areas, and there is also Montana’s muzzleloading deer and elk hunting season December 10-18, 2022.

• A person may capture a deer or elk with a license or permit valid on the last day of the general hunting season.

• Any unused license permit in effect on the last day of the general season (ie, November 27, 2022) is valid during the Muzzleloader Heritage Season.

• The muzzle-loading rifle must be at least .45 caliber and have no more than two barrels.

• During muzzleloader hunting season, hunters may not use muzzleloading rifles that require the insertion of a cap or primer into the open breech of the barrel (in-line), are breech-loadable, or are equipped with an optical magnification device.

• The use of prepackaged paper or metal cartridges, sabots, gas controls, or other similar power and range-enhancing manufactured charges that enclose the projectile from the rifling or barrel of the firearm is also prohibited.

• Many of Montana’s Wildlife Management Areas are closed seasonally from December 2nd through May 14th. Before hunters go into the field, they must check hunting regulations to ensure they are being followed. A list of WMAs and their seasonal closure dates is also available online.