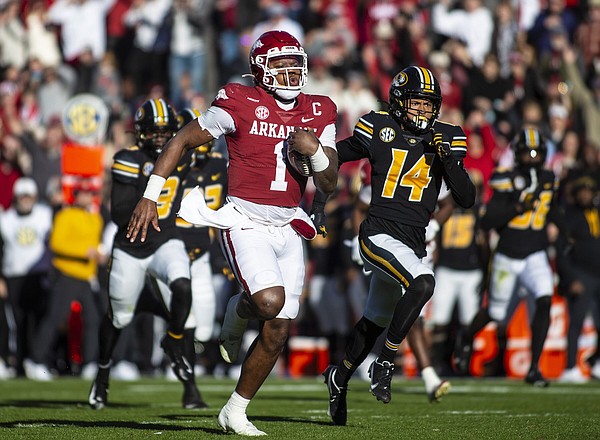 COLUMBIA, Mo. — The Arkansas Razorbacks made a big deal about trophy games in 2021.

More specifically, trainer Sam Pittman placed a lot of emphasis on winning trophies last year, especially as the University of Arkansas won the Southwest Classic, Golden Boot, Battle Line and Outback Bowl trophies, in that order, while going to a 9-4 -season stormed.

There is a picture of Pittman in a suit and seated on a throne surrounded by these trophies and Larry the bowling ball on the inside back cover of the UA Media Guide.

This season has made a different story on the trophy front. An injury-related and unfortunate run through the middle of the schedule has cost the Razorbacks the first two of those trophies, five points total in losses to Texas A&M and LSU.

Larry the bowling ball showed up last week when the Razorbacks (6-5, 3-4 SEC) defeated Ole Miss 42-27 to qualify for the Bowl. But all that’s left to defend in the regular season is the Battle Line Trophy, an eight-year-old creation of entrepreneur and former Razorback David Bazzel, awarded to the winner of the burgeoning rivalry between the Razorbacks and Missouri.

“They’re important, we just don’t have them,” Pittman said of the Hogs’ trophy haul. “We have this one. They are really important to our football team. I brought the trophy to the team meeting and I didn’t have it. I uploaded a picture of it when we won it last year.”

The relatively new frontier opponents will start at 2:30 p.m. today at Faurot Field, with more than one major trophy at stake.

The Razorbacks are looking to salvage that one remaining piece of hardware of the season, potentially move up the bowl pecking order and win in Missouri for the first time in 78 years.

“It’s extremely important,” Arkansas quarterback KJ Jefferson said of the game. “I mean we take it very seriously just being able to try and keep that trophy at home just knowing it’s the last one here.”

Arkansas had strong motivation to qualify for the Bowl last week, beating Ole Miss by jumping 42-6 early in the third quarter. The Tigers could have similar fuel this week.

“I have a feeling they’re going to come out like their hair is on fire,” Jefferson said. “They will come out and hit us with everything they have.”

Linebacker Drew Sanders, who was named one of five finalists for the Butkus Award this week, said the Razorbacks will focus.

“It’s always a big deal to win a rivalry game, especially a trophy game,” Sanders said. “Ending the regular season with a win would be great for everyone too. Because of how big this rivalry is and how much it means to our team, it would be a great thing to beat these guys.”

The Tigers (5-6, 2-5) need a win to qualify for the Bowl, but third-year coach Eli Drinkwitz said that’s not the team’s focus.

“This week is all about Rivalry Week, Arkansas, the Battle Line Trophy,” said Drinkwitz, an Alma native and Arkansas Tech graduate. “And what happens after that happens. We are just concentrating on winning this trophy.”

Sophomore quarterback Brady Cook knows that achieving one goal for the Tigers will lead to another.

“Obviously we know what happens when we get that trophy,” said Cook. “So let’s just focus on the trophy. That’s the most important thing: to establish that rivalry and make sure we’re one step ahead of it.”

Arkansas tight end Trey Knox speaks as if the intensity of the rivalry is already on its way.

“We know they’re going to gossip a lot and try to hit us after the whistle with a few hits and stuff, so let’s just stay calm,” Knox said. “Just play our football and don’t let anyone tell you what we’re going to do.”

Missouri has dominated the series against Arkansas despite being only in its 11th season in the SEC. The Tigers lead the all-time series 9-4, and have held a 6-2 lead since joining the SEC.

Arkansas broke a five-game losing streak in the series with a 34-17 win in Fayetteville last year, but the Razorbacks have never won in Columbia, Mo.

There are ties between the programs, the strongest of which is Arkansas defense coordinator Barry Odom. Odom, a former Missouri linebacker, was the Tigers’ head coach from 2016 to 2019 before being fired with a 25-25 record after a 24-14 win over the Razorbacks at Little Rock in the 2019 season finale.

He is now Pittman’s right-hand man as the first associate on his staff.

Arkansas might have already clinched a win at Columbia if Odom hadn’t dared in 2016. Trailing 24-14, Odom claimed a fake punt from his own 7-yard line in the third quarter.

The Tigers converted on Anthony Sherrils’ 14-yard run, scored a touchdown on Drew Lock’s 67-yard pass to Johnathan Johnson two plays later, and were on their way to a 28-24 win.

Odom went 4-0 against the Razorbacks and Pittman believes he’s forced to beat his alma mater.

“I think if you put yourself in his shoes and someone lets you go and you feel like you did a good job of what they did, they probably have a little chip on their shoulder,” Pittman said. “I imagine he would do that. And then you go to the other side and they still have kids on the team that he recruited, so you obviously know there’s a great love for those kids that he trained and recruited.”

Current Tiger Tauskie Dove was asked if it would feel odd to face Odom.

“No, not really,” said Dove. “Unless you’re one of those people that’s kind of weird about it. But at the end of the day, it’s just football. It’s nothing personal. Everyone knows football is a business. Every team tries to win.”

Odom has one of the strongest motivations on the field. On his first return to the stadium after his layoff, Arkansas took a 48-47 lead on Jefferson’s 14-yard touchdown pass to Mike Woods, followed by a 2-point conversion pass by the same tandem with 43 seconds remaining.

However, the razorback defense allowed Missouri quarterback Connor Bazelak to move the Tigers 60 yards in the final 43 seconds in seven games to go 50-48 after time was up on Harrison Mevis’ 32-yard field goal to win.

Pittman was there for the first and last.

“I remember Game 14 because Brandon Allen … he was injured now going into the game,” said Pittman, who was the UA offensive line coach at the time. “In fact, at the start of the game we didn’t know if he was going to play.

“He just stuck it out, you know. So he was hurt. I remember it. I think we were halfway, maybe 14 or something. And they came back and they actually won [East division] this year if I’m not mistaken.

“Last time we were up there we had a lead on them too. Then they came back and we went to 2 and took the lead and obviously they had a nice ride there at the end. Rivalry games, it was supposed to be close games for me think we’re two pretty even teams.

“It seems like the results were the same up there. But I think our kids will be ready. I’m sure Missouri will be because of bowl eligibility.”