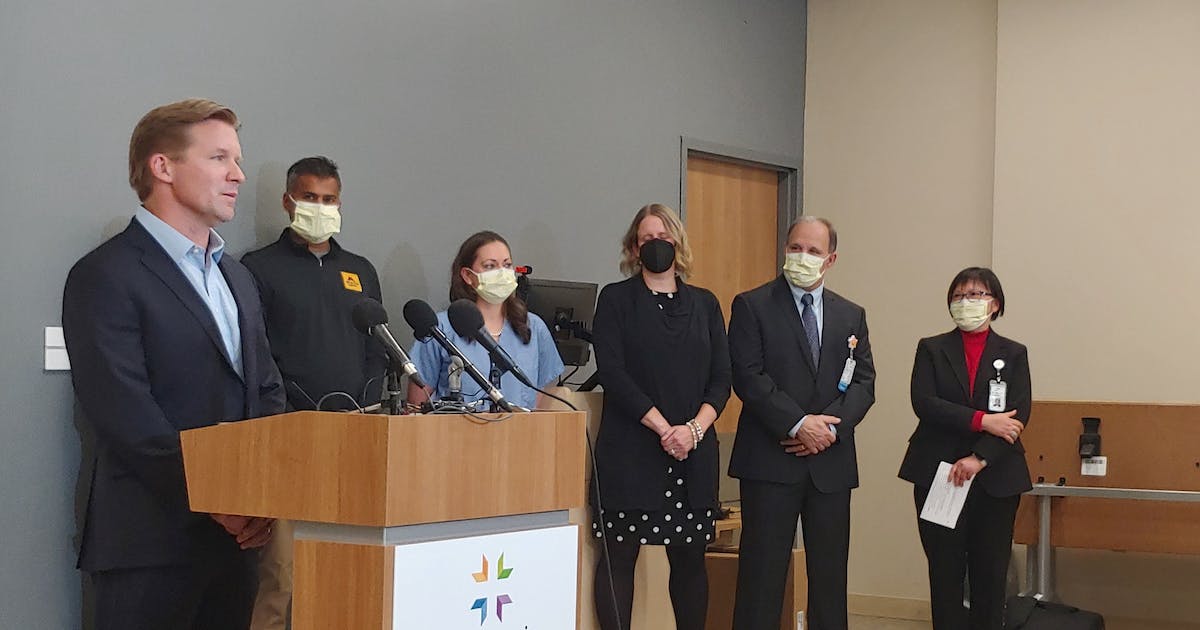 While critically ill children need immediate care — especially those who are dehydrated or have breathing problems — doctors said there are many patients who could be cared for at home.

“Fever, in and of itself, is not a reason to go to the emergency room unless it’s long lasting,” said Dr. Andrea Singh, Chair of Pediatrics at Park Nicollet. “More than four to five days, we probably want to see you.”

Physicians from six competing medical systems held a joint press conference Monday to offer a unified voice of warning to Minnesotans in the face of early and high infections with RSV and influenza — and still some COVID-19.

As of November 15, only two of 144 pediatric intensive care beds were available in Minnesota, a 98% occupancy rate that only happened twice during the height of the COVID-19 pandemic, according to the latest status update. Only 29 out of 441 general pediatric beds were available at this time. The high occupancy rate is forcing more children requiring inpatient care to sit in emergency rooms and more patients requiring emergency care to sit in waiting rooms.

“There were days when we had 30 to 40 kids waiting in our emergency room for an inpatient bed,” said Dr. Rob Sicoli, medical director of Children’s Minnesota’s emergency departments in Minneapolis and St. Paul. “It’s unprecedented. It ensures that all the other children are cared for.”

RSV, short for respiratory syncytial virus, occurs in infants every winter, but usually doesn’t appear until December. However, conditions have changed during the COVID-19 pandemic as RSV emerged last summer and this fall. According to the state’s weekly respiratory disease reporting, more than 180 RSV-related hospitalizations were reported among patients in the seven-county Twin Cities metropolitan area in the week ended Nov. 12.

Minnesota’s 439 flu-related hospitalizations are also unusually high at this point in late fall, according to the state report. The median age of these hospitalized patients is only 48 years, below the norm of 50 to 70 years, reflecting the rise in infections among children. So far, no deaths related to the pediatric flu have been reported.

Doctors walked a fine line in their messages Monday, not wanting to discourage parents from bringing children who need hospital-level care.

But she said parents should bring children who are dehydrated (often indicated by dry diapers), have a fever above 44 degrees for five days or more, or are struggling to breathe so much that their ribs are exposed when they inhale or “their nostrils” flare up up and down, kind of like the bull you see in cartoons in the Looney Tunes days,” she said.

Seeking RSV testing in mild cases isn’t necessary — in most cases, there are no specific treatments for the infection — and takes up limited capacity in clinics and hospitals, Dr. Jill Amsberry, Medical Director of Children’s and Adolescents’ Hospital at St. Cloud-based CentraCare.

“We don’t have to do RSV testing to go back to kindergarten or school. Unless you have other healthcare needs, we just urge you to stay home,” Amsberry said.

Staffing shortages in hospitals — in part due to a brain drain amid the COVID-19 pandemic — along with rising patient numbers have added to the pressure.

Sicoli said the current situation with flu and RSV is comparable to a “bad midwinter” in other years. However, it is unclear whether the early start of the respiratory virus season will result in an extended season or just an early peak and then a milder winter.

Fears of a severe flu season first emerged globally in Australia, where there was an early rise in sick children, but it dissipated quickly and did not take an unusually heavy toll on the elderly. Other parts of the southern hemisphere have not had a severe flu season.

Hospitalizations related to RSV may already have plateaued in Minnesota, but along with the sudden spike in influenza cases, are still creating pressure. In addition to deciding whether to admit children to foster care, the primary way parents can help is by reducing illness, said Dr. Will Nicholson, President of the Minnesota Medical Association and Vice President of Medical Affairs for M Health Fairview’s East Metro Hospitals.

Strategies include staying at home when sick, washing hands, getting vaccinated and wearing masks in crowded, high-risk places, he said.