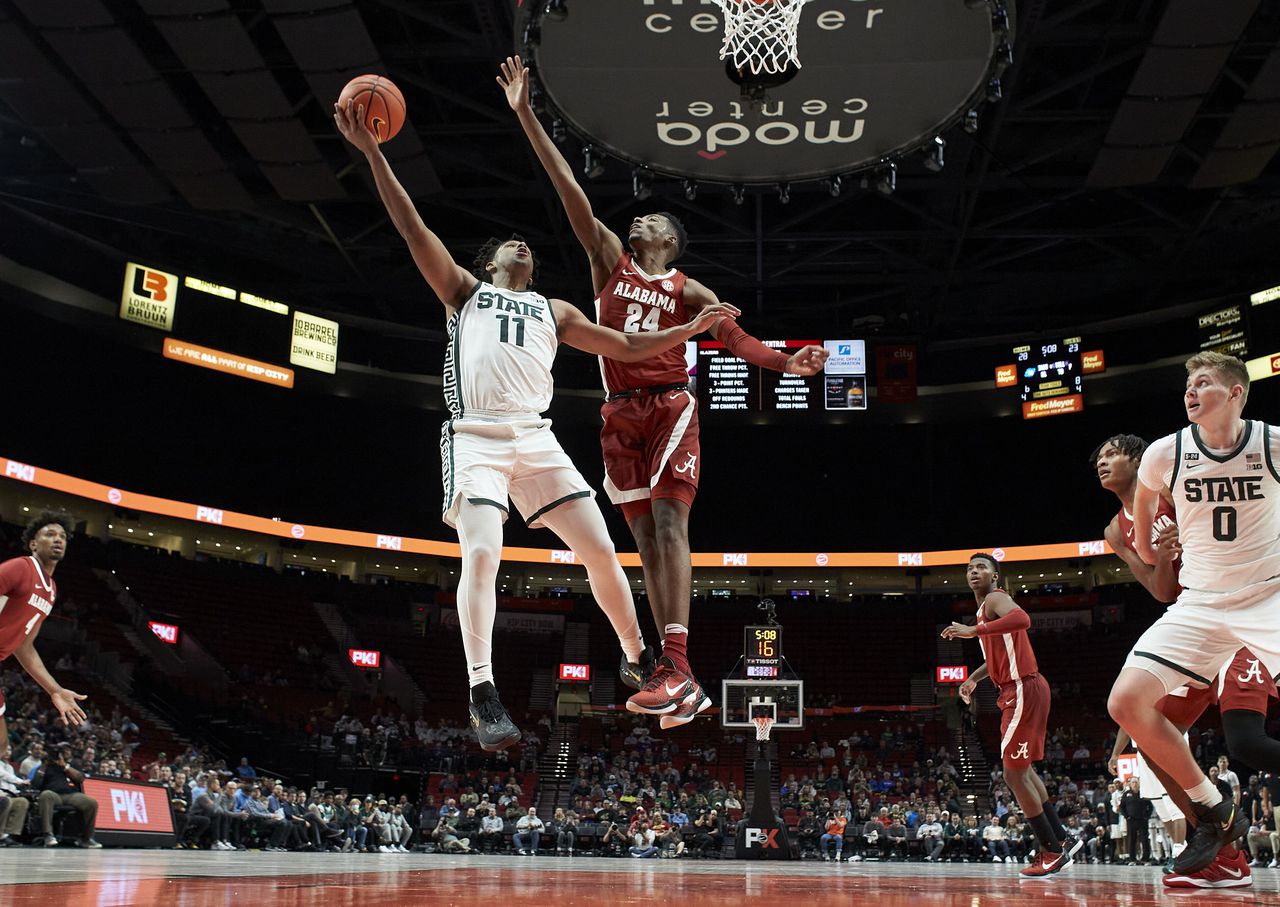 The undermanned Spartans fell apart in the second half as they lost 81-70 to No. 18 Alabama in a quarterfinal game of the Phil Knight Invitational on Thursday night at the Moda Center in Portland, Oregon.

The No. 12 Spartans will now play Oregon in their second of three weekend games on Friday night. The Ducks lost to Connecticut, 83-59, earlier in the day.

Michigan State was without two of their top six players in Malik Hall and Jaden Akins. Both are out with foot injuries; Akins had the same foot that had kept him off for nine weeks in preseason, while Hall began to feel unwell after the team’s Friday game against Villanova and was diagnosed with a stress reaction.

Their absence ultimately proved too much to overcome as Michigan State wilted in the second half, unable to be saved by a standout performance from senior guard Tyson Walker.

Walker scored 21 points in 9-for-22 shooting and served as the Spartans’ primary scoring option for most of the night. He added four assists and three rebounds.

Though Hall and Akins were absent and didn’t make a basket for nearly six minutes to open the game, Michigan State still led much of the first half and limited Alabama’s 3-point shooting while getting to the foul line to create an offense.

But it lost that lead late in the first half, allowing Alabama to put the momentum into the locker room: Pierre Brooks missed a 3-pointer with five seconds left and then failed to close at the other end when Alabama’s Brandon Miller hit a long hit scored 3-pointers on the buzzer to bring the Crimson Tide ahead by five.

Miller, a potential top-five pick in next year’s NBA draft, had 24 points and eight rebounds to lead all scorers.

But Michigan State was eventually wiped out by a cold stretch: Starting with 17 minutes into the game, the Spartans missed 13 of 14 shots over a stretch of more than eight minutes while Alabama extended their lead to 18 points. Michigan State finished the game 4-for-13 from 3-point range.

Walker answered that stretch with three straight buckets as he helped Michigan State cut its deficit to nine, but Michigan State came no closer than eight points by a 1:41 lead.

Point guard AJ Hoggard finished the 6-for-14 shooting with 18 points but also had just one assist and three turnovers.

The absence of two of the Spartans’ top six players made an already thin team even thinner. The Spartans had to turn to several unknown faces to fill in the gaps: All three Michigan State freshmen, Jaxon Kohler, Tre Holloman and Carson Cooper, enjoyed season-best minutes, and walk-on Jason Whitens also played the first significant minutes of his career .