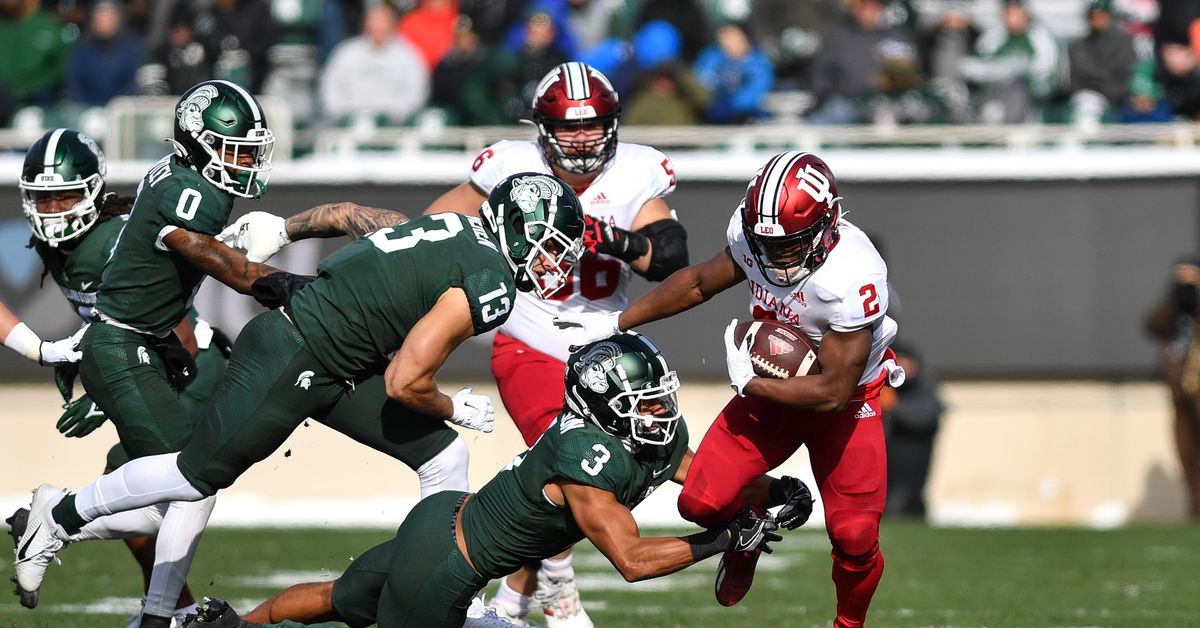 I can’t help but feel that in a way this is my fault. A week after I finally handed the coordinators some flowers in this column, Michigan State comes out, winning an Indiana team by nearly double the overall length and wiping out a 17-point lead in a double overtime loss. Maybe I should have seen this coming? Some people have:

There are so many things to point out including lack of talent from the previous coaching staff, suspended players, injuries and so on. I’m honestly not interested in hearing that because in the third year of the Mel Tucker era, the same game management errors from game one against Rutgers shouldn’t still be plaguing the team in 2020. Tucker needs to figure things out, and fast.

From a schematic point of view, in a roughly chronological order, these are things that I found fascinating.

Early in the game, Michigan State fell victim to a poor run that matched a run in the quarterback zone that was capped by a really ghastly tackle from No. 3 Xavier Henderson. So it works.

We start towards the end of the second half where MSU comes out in their base two-by-one 11 staff set. The tight end (Maliq Carr, No. 6) bets on a zone left pass block and the routes at the bottom of the scheme are redundant as that ball never goes to wide receiver Keon Coleman (No. 0), who boxes from his man and make a great game.

It’s not exactly a goal-line fade, it’s not a problem, it’s just sort of… “Here, have this ball thrown vaguely at your outside shoulder.” The kid is fine, folks.

The bad thing about a 4-2-5 base defense is that with just two linebackers, your second layer of defense is definitely exhausted. Indiana took advantage of this, fielding three wideouts on the wide side of the field and forcing MSU’s linebackers to spread, functionally putting No. 13 Ben Van Sumeren out of the box.

Michigan State has a five-man box against a team that had fewer than 10 passing yards in regulation and has an established quarterback run threat in No. 5 Dexter Williams II. This essentially penalizes MSU in boxing players by five to seven, which is utterly unfathomable.

Michigan State has no margin for error, and when safety Kendell Brooks (No. 33) hops out instead of staying in the lane, Indiana’s MSU, who is running back Shaun Shivers (No. 2), gets caught for a long touchdown run injured.

I can’t stress how much this can’t happen from a pre-snap perspective. Also, just plain poor safety play from Brooks, a senior who has been solid for the most part this season.

For other things that I found unacceptable, I felt like from a blocking perspective, there were instances where people were being asked to do things that they were physically unable to do. It’s a sad fact that the tight ends and wider offensive tread struggle to be plus blockers.

Indiana is a very lightning-fast team, so I understand things wouldn’t always be easy. However, if you’re asking if Daniel Barker (No. 9 trying to end up blocking Indiana’s Alfred Bryant, No. 92) things like do Thisyou don’t help yourself at all.

Asking Barker to block a stray defensive end in Bryant strung at least a half gap in him is bluntly absurd. At the very least, Barker’s split should have been smaller, and he shouldn’t be counted on to make such a critical block at the attack point.

I’ve seen a lot of dismay on the interwebs about Michigan State’s fourth-down play call midway through the fourth quarter, and honestly I can’t disagree with a lot of what anyone said.

As for the design, I just don’t get it. Everyone’s close, and you’re running wide receiver Jayden Reed (No. 1) on the move. OK sure. Where I lose myself I send two people down the seam in the same areawhere none can be open or even one on one.

That’s down to offensive coordinator Jay Johnson. However, what isn’t the case is that Thorne Reed doesn’t knock out of move action when he’s one on one with someone on the border. If that Indiana corner can attack Reed in the open field, tip that cap. However, it’s a higher percentage game than a seam bomb for a covered man.

Another, better fourth-down event occurred on MSU’s final regulatory drive. While only a three-man route, having a matchup nightmare like Maliq Carr executing a leveraged win-out route against an undersized cornerback is an ontologically better concept than the game above. It’s simple, it’s a quick read, it’s on the short side of the field, and it has the length needed to get first place.

Regarding the third-down game at the end of regulation, I developed an operational theory. The run is clearly blocked on the right, but running back Elijah Collins (No. 24) slices to the left at a loss, missing the kick from the left hash.

When I first saw Tucker say after the game that the Spartans usually went for a touchdown, I didn’t believe him. However, if you watch it again (and again and again and again) the game is a split zone going to the right. There’s a kick out on the left, a wide receiver crack block on one end, and another tight end released to the force player on the high right. This is 100 percent for Collins to follow his blockers to the right to get into the end zone.

Looking again, Collins doesn’t cut back until left tackle Brandon Baldwin (#53) gets hit and Collins is stuck with a right to go.

In overtime, MSU pulled out a nice G/T counter that I talked about at length last week.

Some superb runs from Collins here, he will be sorely missed unless he returns in 2023 for his final year of eligibility.

Surprisingly, I had no notes on the game that set the Indiana score in overtime. Henderson, a true team leader, needs to get over that ball quicker and he didn’t and he’s now in his last game at Spartan Stadium. It is what it is, and it is a disgrace to the Spartans.

I didn’t have notes on MSU’s last game either, but I liked the design of Spartans’ second game in the same series. A trio bundle above highlights Barker below. I like to use a split out tight end when there is a matchup issue.

Barker comes closest to that at MSU, so he’s been fielded as a wide receiver, along with Brock Bowers at Georgia, Erick All at Michigan and Rob Gronkowski at the New England Patriots. It could be argued that Coleman should have been in his place, and I would argue that if I didn’t believe it would result in either Indiana requesting a timeout and changing their defensive play call, or an automatic double -Team.

The throw is a bit off and Barker doesn’t quite have the athleticism to achieve the necessary separation, but it’s a good game design.

This game was a gut punch for Michigan State, and we’ll see what the Spartans bring to their potential season finale next week.