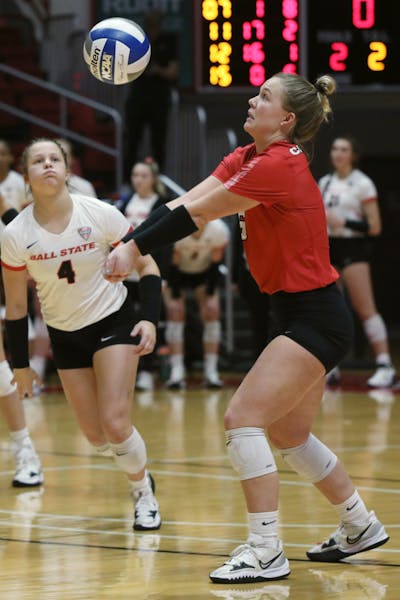 As the crowd at Worthen Arena rose, players hugged in halfway.

“I think it’s great to play at Worthen,” said third-year winger Cait Snyder. “They create a great atmosphere and their energy is great and drives us.”

The Cardinals earned first place overall for the MAC tournament after finishing the regular season as champions, giving them a first-round bye and home field advantage throughout the tournament.

“The atmosphere here is incredible,” said fourth-year middle blocker Marie Plitt. “The fans are always on their feet and loud and that helps us a lot.”

Monday’s semifinals began with a 23-25 ​​set loss for Ball State. Central Michigan (20-11, 12-6) jumped on the Cardinals early and at one point led the set for 13 straight rallies.

Many of Chippewas’ points in their first set win came from gaps in Ball State’s defense that went unfilled. The Cardinals gave up points for blocks that weren’t fully completed, tipping the ball and the game going wide.

Ball State cleaned up in the second set, had four fewer penalties than Central Michigan and had a batting average nearly double the Chippewas.

After making the necessary adjustments from first to second sets, the Cardinals took firm control and never gave up the lead after a kill by Snyder, one of their team-high 21s, gave Ball State an early 4-3 lead would have.

The problems that had plagued set one for the Cardinals seemed to come back in set three.

A batting average of .167 and a total of 11 errors, nine of which were attacking errors. Gaps in defense were again exploited by Central Michigan. But then something changed.

Leading 18-14, the Chippewas looked to eliminate Ball State to take a 2-1 aggregate lead in the match.

The Cardinals beat Central Michigan 11-5 in the following games to win the third set.

“I felt like we played tighter than we needed to,” said head coach Kelli Miller Phillips. “I told them if there’s a lesson to be learned, there’s just no joy in it and we’re not doing our best at it.”

A back and forth set four saw both teams engage in a slugfest. Neither team had a hit percentage greater than .300 and both teams combined had 12 attacking errors.

“We can be confident and enjoy it,” said Phillips. “We worked really hard to be in this position and the only thing I wanted to take away from them was to relax and enjoy it.”

The Cardinals return to Worthen Arena tomorrow at 4:30 p.m. for the last time this season in the MAC Championship game against 2-seeded Bowling Green.