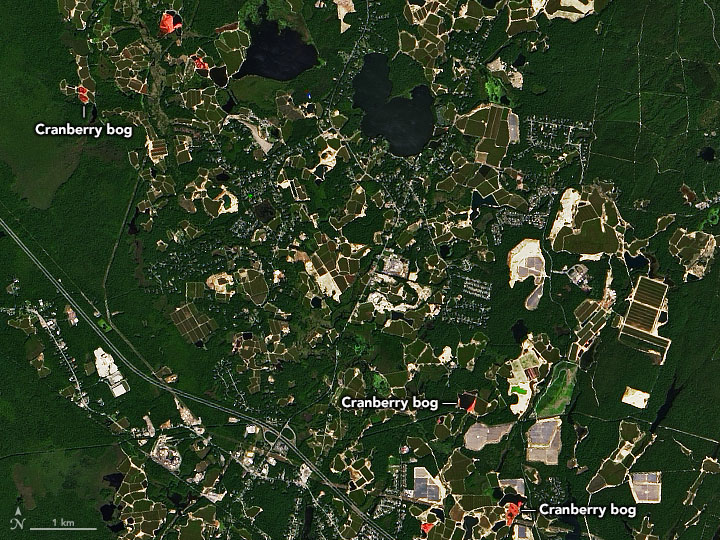 Cranberries have a long history of growing in temperate climates throughout the central to eastern United States and from southern Canada to the Appalachian Mountains. Cultivation of this tart berry—Vaccinium macrocarpon– first appeared on Cape Cod in Massachusetts in the early 19th century. Today, statewide cranberry production covers about 35 square miles and provides about a quarter of the cranberries grown in the United States, surpassed only by Wisconsin.

Cranberry plants thrive in Massachusetts, where acidic soil and coastal wetlands are favorable for their growth. Natural cranberry bogs formed in impermeable, clay-lined depressions formed by glacial deposits at the end of the last Ice Age. These “cauldron holes” filled with layers of organic matter and water, and cranberries followed. 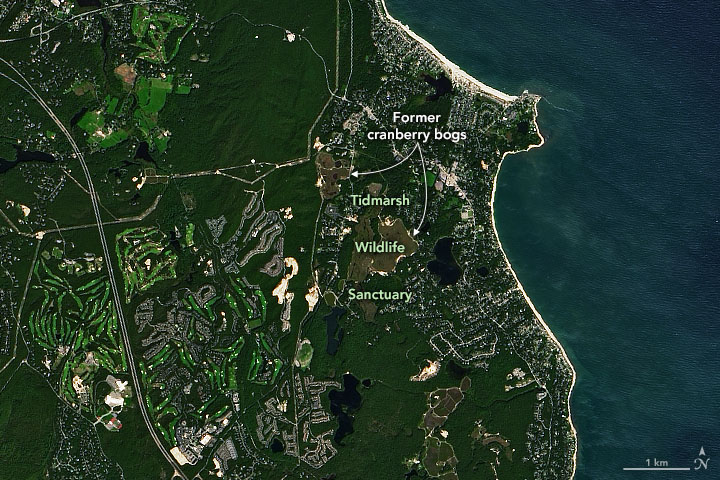 Many commercial bogs developed on Cape Cod take advantage of these natural bogs. On the mainland, including Plymouth County, they were often developed in abandoned bogs previously used to mine iron ore. At both locations, the plants are grown in beds with layers of sand, peat, gravel and clay, and are supplied with water from the surrounding wetlands.

The berries are harvested from September to early November. This is often done by flooding the beds, causing the berries to float to the surface where they can be penned, removed, and then processed. While cranberry production accounts for 22 square miles of land throughout Massachusetts, a much larger area — more than 90 square miles (230 square kilometers) — is open space associated with the farms and their wetland systems.

A handful of cranberry farms across the state have been shut down in recent years. The Massachusetts Department of Fish and Game’s Division of Ecological Restoration has worked with partners to convert some of these farms back into a self-sustaining wetland. One such area in Plymouth is shown in the second image acquired by Landsat 9 on 24 September 2022 with OLI-2.

The restoration of the former 600-acre farm and its bogs, now known as the Tidmarsh Wildlife Sanctuary, has improved the waters that flow into Cape Cod Bay and improved wetland habitat for birds. The site also served as a testbed for understanding in situ measurements of dense organic soils to help scientists better interpret space-based measurements of soil type from NASA’s Soil Moisture Active Passive (SMAP) satellite.