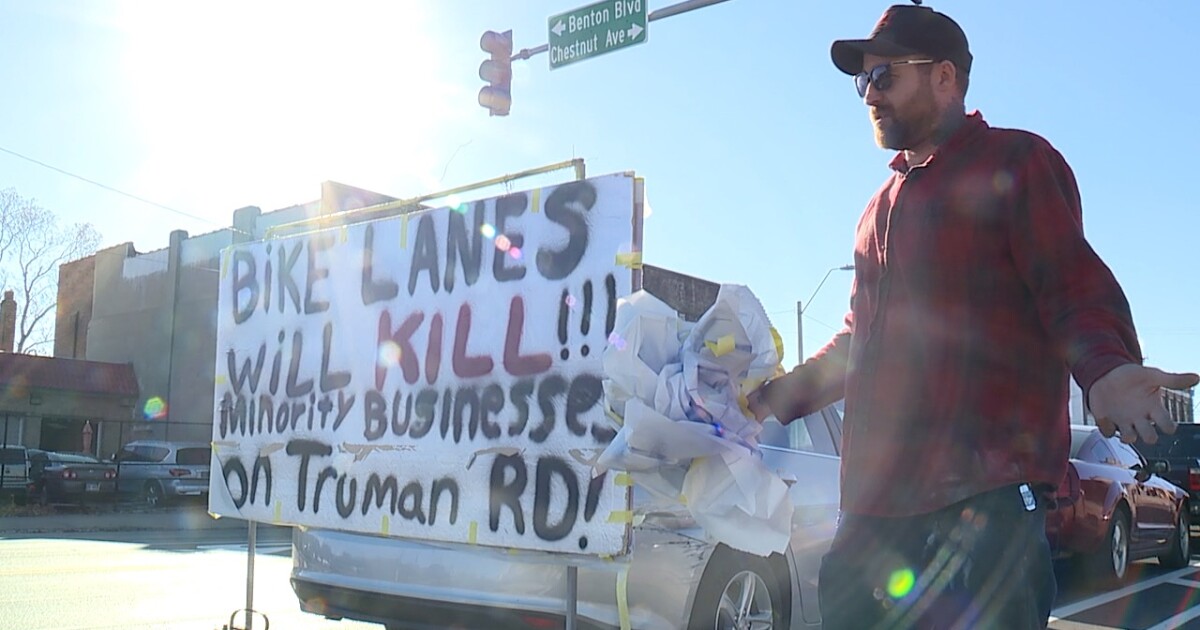 Shopkeepers along Truman say it hurts their business and confuses drivers.

Shawn Arcidino is the owner of The Atomic Collision store on Truman Road.

He says he hears a lot more horns from confused drivers over the grinder and other auto jobs he does at the shop.

“We knew then that we had a problem,” Arcadino said.

He says the roads have just been refinished.

The City of KCMO added a bike lane, but at the cost of taking away a lane.

Arcadino decided to tell the city what he thought about it by putting up signs, taking a close look at the city and saying the traffic change was ruining Truman Road.

“The sign is actually doing something good,” he said. “There was no warning, there is no reconnaissance. I literally let people know to park here now and everyone has the same reaction.”

A spokesman for KCMO said Arcadino parked where it’s supposed to — in the right lane next to the bike path.

On Monday, KSHB 41 saw drivers slam on their brakes and have to dodge around each other with the new traffic pattern.

Bailey Waters of the KCMO Public Works Department says the work is ongoing.

According to Waters, the city will add parking rule signage and stick barriers along the bike path. She said it will be ready in about three months.

“People can park at the buffered bike lane,” Waters said.

Waters explained why the city decided to make the changes.

“The main reason we’re removing lanes on Truman Road is the dangerous nature of the road,” Waters said. “There’s still room on the street. With how many lanes there were before and with how much traffic is on the road. So what do we do with extra space? We see again and again that removing lanes from the road when it is not congested makes roads safer.”

Waters said the city is not currently issuing tickets or enforcing parking fees.

But the parking guidelines will remain the same in the future, despite the removal of one lane.

Waters says people can only park in the right lane when there are no rush hours.

Arcadino said he was disappointed the city didn’t receive contributions from business owners.

“It’s not good for business,” he said. “We didn’t ask for it, we couldn’t vote on it – every company feels like me. I’m just vocal about it.”

“We’re analyzing traffic numbers right now to see if we can make it a permanent lane,” Waters said.