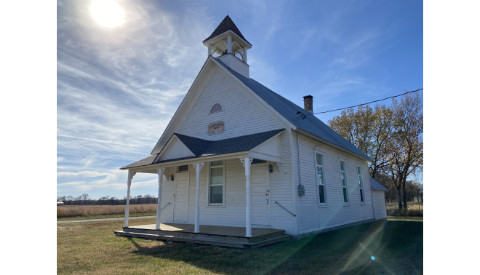 The very first attempt at settlement in what is now Osage County was called Council City. But Council City had a problem. The settlement company that funded and planned it was disorganized and no one could quite decide where the best location should be – or whether it should be called Council City! After several attempts to establish a site, the main settlement appeared to find a resting place in an area spanning almost half a township between Switzler and Dragoon Creek, roughly where Burlingame is today. At the head of Council City enterprise in its earliest days was James Winchell.

Winchell had been with the settlement company since arriving in Kansas in the fall of 1854. Shortly after their arrival, the members of the society each chose their favorite areas. Winchell chose a large, wooded lot near the confluence of the two streams. Not only was it beautiful, but it contained significant building benefits. Desperate to start organizing the city, he became its first postmaster.

But when Philip C. Schuyler arrived in Council City in the spring of 1855, he had his own ideas for Council City. Both Winchell and Schuyler were very ambitious personalities, and it soon became clear that their ambitions could not be combined.

Winchell abandoned Council City at the Switzler site, choosing instead to place available resources at the southern end of the proposed Council City tract for his own city.

His first attempt would be in 1856 with a city named Fremont in honor of General John C. Fremont. Earlier this year, Winchell served as a delegate to the first Republican national convention. At that convention, Fremont was declared the Republican candidate for the presidency. Winchell’s support for General Fremont led him to use that name for his city. However, John C. Fremont did not win the presidency, and his namesake city also lost momentum.

The very next year, 1857, another attempt was made to build a city at the Fremont site. In the north, PC Schuyler had taken full control of the Switzler Council City site and was preparing to launch his new city – Burlingame. Likewise, Winchell’s Fremont also got a name change that year – to Carbondale. Yes, dear reader, you read that right – Carbondale. This Carbondale bore the same name as the current one and for the same reason. Money.

A group of men from the town of Wyandotte, led by Professor Edward Daniels (Wisconsin state geologist and also emigration agent for the National Kansas Committee), took a special interest in what he called “great physical resources” in Kansas because Kansas was a free state was admitted to the Union. Daniels was assisted in this endeavor by Horace White, who was serving as Secretary of the Carbondale Town Company. White, like Winchell, was a journalist determined to champion the cause of the free state. Winchell was not listed as being directly connected to these men, but he was living in Wyandotte at the time.

The plan for Daniels and White was to sell land for the east town and encourage emigration to Kansas. However, there was a problem. The country was in a great financial depression and the men could not lure buyers into buying the rich coal lands, even at reduced prices. And so, like Fremont, that city would fail.

In early 1858, Winchell made another attempt at a town, this time named Superior. Burlingame, meanwhile, had continued to grow, making a new nearby town risky. But Burlingame was in Shawnee County at the time, and Superior was in what was known as Weller County. Besides, Winchell didn’t really care what anyone else thought. He pursued what he wanted, despite all obstacles. This extended from his business dealings to the navy blue coat and tails he wore at all times (scandalous both for its color, too similar to a military uniform, and for the startlingly conspicuous brass buttons that adorned it).

For Superior, Winchell directed the operation with the support of his Wyandotte friends. The Wyandotte men were so numerous that Superior became known as “a child of Wyandotte”. Plans have even been made for a road connecting the two cities and a college. Eventually, the town was reported to have had a meeting place, a hotel, a general store, a brick factory, and artisans who made furniture.

However, the main feature advertised was plans for a large school, which also reflected James Winchell’s personal interest. Education was a passion for Winchell. After completing his secondary education in his hometown of New York, he attended State Normal School in Albany, eventually graduating at the top of his class. These inspired a great love for education, and he firmly believed that “there is no such rich legacy as a good education”. However, it is uncertain whether Winchell’s dream of a school was realized.

Superior would slowly fade away and James Winchell would leave Kansas and return to his hometown of New York. Some of the buildings on the Superior Town site have been repurposed. The hotel first became a cheese factory operated by Henry Sheldon and was later demolished, but the building materials were used to build a barn that stood near the US Highway 56 site until last year. In 1868, a brick school was built on the Superior City site and named after its namesake. The current lumber school, which sits along the highway, was built in 1894 and is the last remaining building that stands as a reminder of James Winchell’s search for a place of his own on the Kansas prairies.

See related story: In Osage County: Superior School, a school without a city

Wendi Bevitt is the owner of Buried Past Consulting LLC. She lived in Osage County for 20 years and her research interests include Osage County Civil War Veterans and Osage County history.