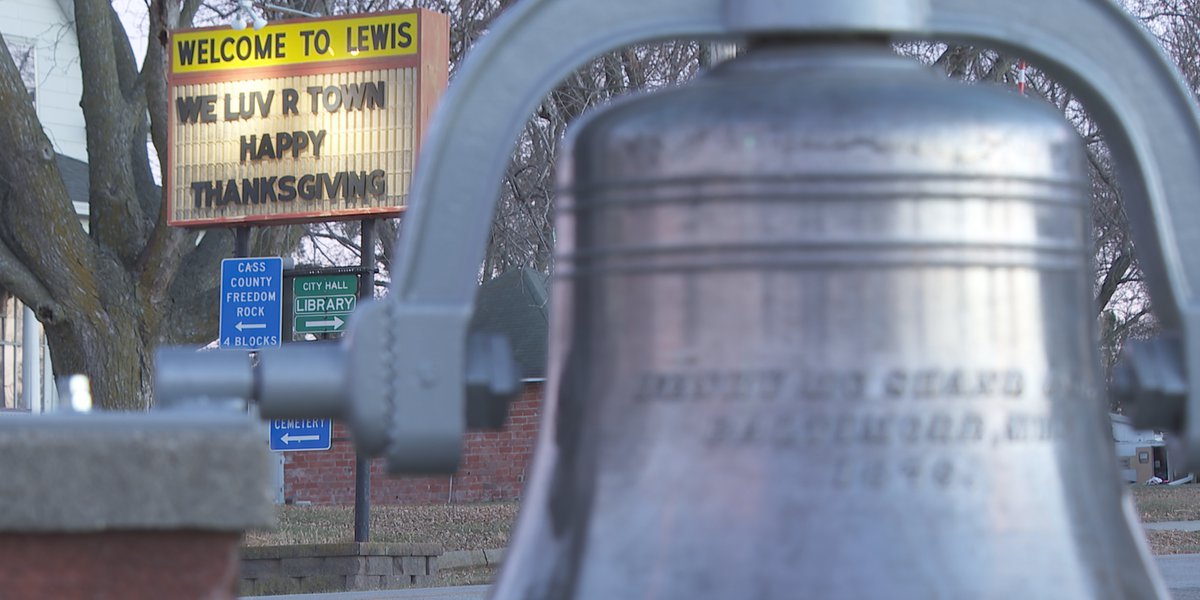 OMAHA, Neb. (WOWT) – Those who settled in the Midwest in the 19th century relied on the ringing of bells. Bells called children to school and families to church.

“That called you to church to begin the day of worship,” said Jerry Hudson of Lewis, Iowa. “Very important.”

Hudson is a board member of the United Congregational Methodist Church (UCMC) in Lewis, Cass County, Iowa. The church dates back to the mid-19th century in the Congregational Church, which became the UCMC after merging with another church around 1970. The church bell that called them to meetings in the Congregational Church from 1865 was moved to a newly built combined church in 1971. By this time the bell was no longer ringing, but its presence was iconic for the small town where it rang for 50 years the corner of 1st Street and Main Street.

Until March, when the bronze bell cast in 1865 was stolen and scrapped.

“When we discovered the bell was gone, we just couldn’t believe it,” said Pastor Jerry Neal. “We were just heartbroken, the bell had been with us since the 1850s.”

So the call went out and offers for bells came in from western Nebraska to Indiana. School bells, church bells, broken bells, shiny bells. The first call came from Homer, Iowa, where Elaine Winchell offered her father’s old bell. He saved it when the old Methodist church closed 40 years ago and passed it on when he died. It was mostly outside in the yard, something for kids to play with. Until she found out about the theft.

“We’ve had so many people reach out to us and offer us bells,” said UCMC Secretary Deanne Knudsen. Elaine was the first to bid, but the bell seemed too big and the church wasn’t sure. “We went back and reached Elaine, we wanted to see the bell, we looked at the bell, and it was just beautiful.”

Some in the Church call it providence. The Winchell bell came from a Methodist church and was forged in 1879 at the same foundry, the McShane Bell Company of Maryland, that made the original bell.

Duane Weirich and company set up his space in the existing marquee, which was decorated by church members. He also created a new cross for the marquee, and last Friday everything was put to the test when the first bell rang.

Those who stole the bell were arrested back in April. They’ve served their time in prison, Neal said. And he said it’s important for people to understand that the church forgives them.

“We’ve been telling people about forgiveness,” he said. “That’s why we have a cross (with the word forgiveness on it), the word reminding us that we’ve been forgiven and we need to forgive all the people who have done that.”

The bell will be dedicated in the service on Sunday, November 27 at 11:30 am. Visitors are advised to arrive early so they don’t miss the historic ringing of the bell to call the church.

It’s more than a ring for the pastor who feels it in his soul. Neal refers to them as the Liberty Bell and Cross of Freedom.

“For me it starts with the heart, you can feel it vibrate and you just know your home, it should be here and it should be here all the decades waiting for us,” he said. “To me the bell is a freedom bell, every time we ring it it declares we are free, and the cross with it… First from the heart, then from the mind, it’s just like, wow, God is.” really good.”