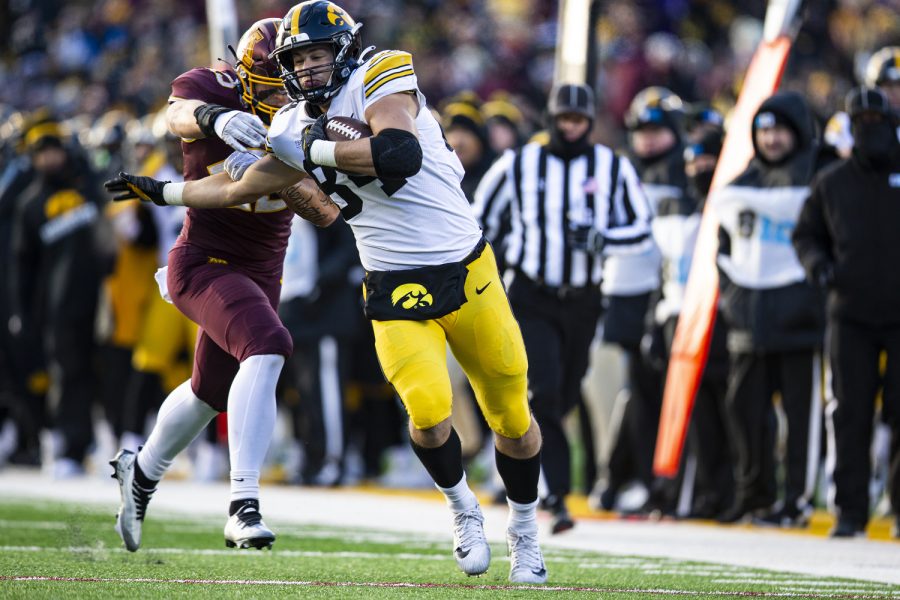 Tight end in Iowa Sam LaPorta runs after a reception during a football game between Iowa and Minnesota at Huntington Bank Stadium in Minneapolis on Saturday, November 19, 2022. LaPorta caught four passes for 95 yards but didn’t finish the game because of an injury. The Hawkeyes defeated the Gophers, 13-10.

LaPorta caught four passes for 95 yards in the first quarter, including a career-long 58-yard reception. The 6-foot-4, 249-pounder left the game limping and went into the medical tent late in the first quarter. He later went back to the dressing room and was ruled out for the rest of the game.

LaPorta returned to the sidelines and ran unaided in street clothes for the second half of the game.

Pottebaum also left the game with an undisclosed injury in the first quarter and did not return. He didn’t record any stats on Saturday.

After the game, head coach Kirk Ferentz did not provide details on LaPorta’s and Pottebaum’s injuries.

“No, I mean [LaPorta] Of course I had to go,” said Ferentz on Saturday. “We’ll probably know more here tomorrow, in the next few days. It was enough to keep him out and he couldn’t go back in. The same goes for Monte.

“That made it more difficult. These are two of our top guys, attacking. They are great leaders and really good football players.”

Sophomore Luke Lachey and true newcomer Addison Ostrenga filled in for LaPorta on Saturday. Lachey, who is Iowa’s third-best receiver this season with 273 yards, is listed as the tight end of the Hawkeyes’ first-team this week, while Ostrenga is his backup.

Ostrenga has played in all 11 of the Hawkeyes’ games this season – mostly on special teams. He has a catch for six yards on offense.

LaPorta was Iowa’s leading receiver in the first 11 games of the season, recording 54.6 yards per game and 601 overall. Iowa’s second-best receiver is wideout Nico Ragaini with 305 yards.

Pottebaum has three catches for 37 yards so far this season, mostly using his talents as an extra blocker. Senior Turner Pallissard and redshirt freshman Eli Miller are listed as first- and second-team fullbacks, respectively, in Iowa’s Week 13 Two-Deep.

LaPorta and Pottebaum are two of 27 seniors to be honored during Friday’s Iowa-Nebraska game. While they are recognized as seniors playing their last game at Kinnick Stadium, both have the option to return for another season in 2023.

Redshirt freshman offensive lineman Beau Stephens was also missing from the depth chart Monday afternoon. The 6-foot-6, 307-pounder suffered an injury against Wisconsin on Nov. 12. Ferentz said Nov. 15 that the Hawkeyes were ready to play without him, and he did not appear in Iowa’s game against Minnesota on Saturday. Junior Nick DeJong took Stephen’s place at right guard.