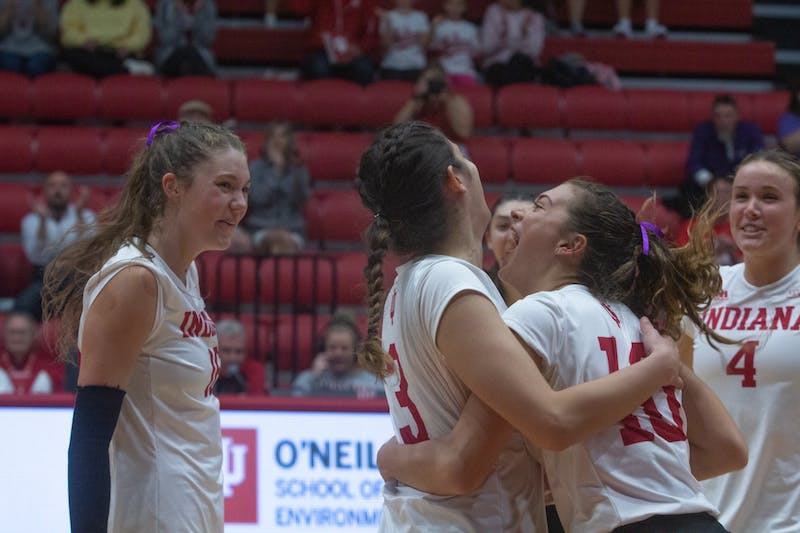 Indiana Volleyball beat the odds and won both games against Big Ten opponents this weekend.

Indiana picked up its first win with a five-set win over Northwestern on Friday night. The Hoosiers then traveled to Ohio State and clinched the nation’s No. 5 team win on Sunday afternoon to wrap up the weekend sweep.

For the first time in over 12 years, Indiana has eight Big Ten wins in a single season.

The Hoosiers’ star in the Northwestern Match was sophomore setter Camryn Haworth. The team captain collected a triple-double, becoming the second player to do so in the Big Ten this season. In addition to Haworth’s career-best 10 kills, she had 37 assists, 11 digs, and a remarkable seven blocks.

The match ended in the closing stages of the fifth set. After an attacking error by Northwestern, Indiana led the set 13-11. Wildcat senior middle blocker Desiree Becker responded with a kill, allowing Northwestern to retake the lead.

Indiana kept their focus, however, as junior winger Morgan Geddes delivered a crucial kill to extend Indiana’s lead to 14-12. With the help of another Northwestern attacking error, Indiana found the last point of the set and won the five-set thriller 3-2.

After Indiana broke their five-game losing streak, his mind shifted to Sunday’s game against No. 5 Ohio State.

Ohio State had a tremendous score late in the fourth set, extending their lead to 18-12. Indiana gradually tightened the game but never took control of the set. Ohio State won the fourth match 25-20 to force a fifth set at the Covelli Center.

Late in the fifth set, the Buckeyes were just a point short of winning the match, but Indiana rallied. Junior middle blocker Kaley Rammelsberg denied the Buckeyes their final point by dishing out a needed kill.

Cerame then moved to the service line at 14-13, sparking a rally that ended with a kill by sophomore middle blocker Savannah Kjoldhede. When the score was 14:14, the match ended with the following two rallies.

Sophomore Mady Saris earned the last two points of the game in kills. With those plays, the Hoosiers caused an uproar against the top five Buckeyes and made Indiana volleyball history.

For the first time in program history, Indiana has beaten two ranked teams away from home in the same season. Indiana’s record improves to 15-15 after two weekend wins. The team will take on Illinois on Wednesday at 5 p.m. at Wilkinson Hall.

Follow reporter Marnie Sara (@Mars45) for updates throughout the Indiana volleyball season.
Support the Indiana Daily Student to beat Purdue’s student newspaper exponent, by donating to the IDS Legacy Fund! Whichever publication raises more money ahead of the Nov. 26 Purdue-IU football game “wins” the challenge, but all donations go to supporting student journalism at their respective publications. To help IU beat Purdue and support the IDS, follow this one shortcut Donate.