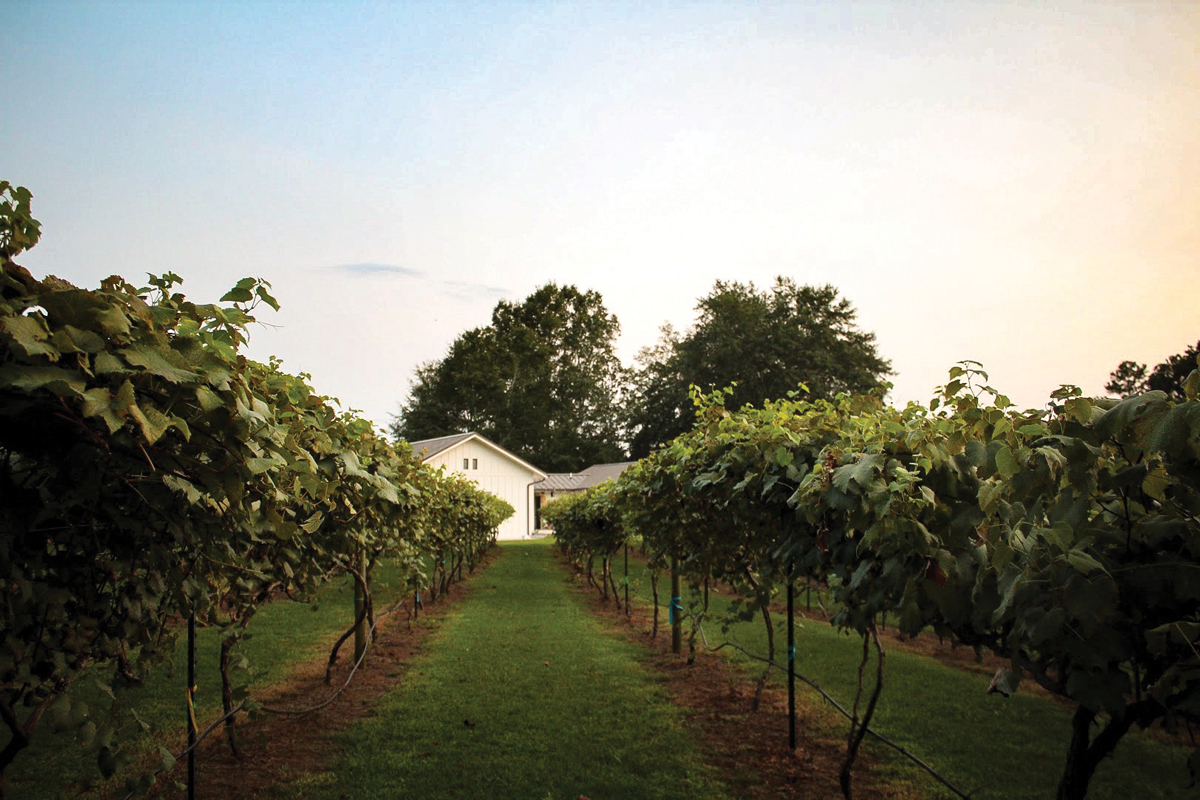 On a sunny August afternoon, a sense of dizzying excitement fills the air as winemakers from across North Georgia gather for an impromptu Georgia Wine Producers gathering at Cloudland Vineyards + Winery in Buford. Some compare the bottles they brought, lovingly made from grapes that – after much trial and error – were grown on land not far from their location. Others admire the rich, deep red hue of a new vintage of Lomanto, a hybrid variety that blends the old-world qualities of European wines with the heartiness of American vines. Everyone seems energized by the opportunity to meet and chat shop and most importantly, share their love of wine made right here in Georgia.

One of General James Oglethorpe’s main goals in founding the colony of Georgia was to grow grapes and make wine. And the state was home to the sixth-largest wine-growing region in the United States before Prohibition. But wine isn’t usually what springs to mind when you think of produce grown in Georgia — at least, not fine wine. The Georgian wine industry, which has been slow to recover from being decimated during the temperance movement and Prohibition, is now enjoying something of a renaissance.

“We’re finally getting into this new era of Georgia wine, where we’re going to head out and discover some grapes that grow really well here,” said Sean Wilborn, winemaker and owner of Cloudland.

Grapes growing well in Georgia are key to this resurgence. As the wine industry hobbled along after Prohibition ended, vintners, many descended from European immigrants, tried to grow familiar varietals, all European cultivars Vitis vinifera. Unfortunately, Georgia did not lend itself well to vines used to the Mediterranean climates of France and Italy. In South Georgia, vines have been afflicted with Pierce’s disease, a bacterial disease transmitted by beetles, while in North Georgia entire vineyards have been devastated by powdery mildew.

“If you look at European grapes, Georgia is actually a terrible place to grow from the standpoint of all the diseases involved, the environment, and the weather,” says Phil Brannen, a fruit disease specialist at the University of Georgia Extension and an expert on growing grapes wine in the state. “We are not a Mediterranean climate.”

However, winemakers are increasingly trying to move away from European grape varieties and focus on grapes that grow better in the Georgian climate, many of which are hybrids of European and American vines. Hybrids like Lomanto, Chambourcin, Blanc du Bois and Vidal Blanc are growing in popularity, and winemakers are proud of the wines they have been able to make from vines that combine the complex flavors of European wines with grapes that actually thrive in northern Georgia’s temperate rainforest. Of the 15 most widespread varieties grown in Georgia today, only four are European; the rest are hybrids or Muscadine species.

However, with evolution comes the challenge of re-educating consumers.

“Consumers don’t know what chambourcin is,” says Peter Seifarth, second-generation winemaker at Crane Creek Vineyards in Young Harris, near the North Carolina border. “They don’t know what these hybrid grapes are, but they do know what Pinot Noir is. So years ago we said, “This is like a Chardonnay, this is like a Cabernet,” when that’s not the case at all. These are completely different grapes.”

Winemakers who have embraced hybrid varietals look forward to sharing them with consumers without the caveat that they might taste similar to the well-known Merlot or Chardonnay.

“Now there’s a shift in where we own these grapes,” says Seifarth. “We say, ‘This is Georgia!’ You cannot buy this grape at the grocery store. You can’t get it in California. You have to come here.”

Even with growing pride in Georgian wine and the hybrid varieties that produce much of it, winemakers are finding it difficult to sustain a business solely focused on Georgian wine. The fact remains that even in a good year with no frost and just the right amount of rain, there simply aren’t enough grapes being grown in Georgia to feed dozens of wineries and feed thirsty customers. Most wineries have to import grapes from other states to keep up with demand. And that’s fine, according to winemakers like Wilburn and Seifarth, as long as wineries are open to customers.

“We manage a vineyard together in Virginia, but by God, we’re going to tell you all about it on the label,” says Wilburn, pointing to the tiny print section that actually gives the consumer ample information about exactly where the grapes came from cultivated. “If it’s not something that we’ve grown 100 percent, we’ll say who else was involved.”

Just as people want to know where the clothes they wear were made or where the food they eat was grown, they want to know the origin of the wine they drink. Also, Georgia winemakers say that incorporating local varietals is paramount to putting Georgia wine on the map, as the hybrid grapes that thrive here may one day be recognized globally.

Climate change has wreaked havoc in popular growing regions around the world, like Napa and Bordeaux, leading wine scientists at the University of California, Davis to work with UGA to develop more disease- and pest-resistant hybrids. Even wealthy regions like Champagne in France have had to relax viticulture rules to make room for grapes that can withstand harsher growing conditions.

“When we started, we planted grapes, which we drank,” says Wilburn. “And that’s not a good start. So now we dare and venture out and see that vigor of the vine matters. We’re trying to play with vines that can survive this crazy jungle we’re in and we’re tasting the grapes, we’re tasting the flavors. And if we can get that intangible taste. . . Boom! Were excited! We make some smoky good wines with grapes that make sense to us here in Georgia.”

Luckily, most winemakers have seen the tide turn and public opinion about Georgian wines evolve. Yes, there’s still a place for muscadine, and some wineries are doing interesting things with Georgia’s native grape, including semi-dry muscadine wine and muscadine brandy. But the real development has been among drinkers who proclaim that all they like is a full, dry, jammy California Cabernet.

“I’ve been working in the tasting room for a while now, and people have preconceived notions about Georgia wine,” says Sandi Diehl, co-owner and associate general manager of Stonewall Creek Vineyards in Tiger. “You’re really pleasantly surprised. They think the only wine is California wine, but we can make good wine from hybrids here, off Vinifera, made from local grapes. It evolves.”

Blessy Devasia, General Manager at Cloudland, agrees. “Right now, 90 percent of our tasting menu is grown entirely in Georgia, and everything people try, they say, Wow, is that grown in Georgia?”

She walks to the edge of the lawn, takes a step away from where this year’s Lomanto crop hangs heavily on the vines, and points to the acres of grapes that thrive on a lush plot just 30 minutes north of Atlanta.

The muscadine of everything

Georgia’s most widespread grape might get a bad rap, but give it a chance and you might be surprised

When people think of Georgia wine, they immediately think of the sweet, almost syrupy taste and shockingly pink color of muscadine. After all, it’s the state grape and claims the largest acreage of any grapevine in Georgia because it can grow almost anywhere.

When colonists from Europe found it difficult to grow Vitis vinifera It was here that they began making wine from the musketball-sized grapes that sprouted around them like weeds, only to find that they had to add an awkward amount of sugar to make the resulting wine taste vaguely like European versions. This intense sweetness, coupled with the low cost of growing Muscadine grapes, gave it a reputation as a cheap, sugary liquor that would get you drunk fast and leave you regretting your decisions in the morning.

Now, however, the grape is making a small comeback. Particularly in South Georgia, wineries are embracing Muscadines and experimenting with new uses. Still Pond Vineyards in Arlington makes Muscadine Moonshine, an 80% spirit softened with the addition of grapes and grains. Other wineries, like Currahee Vineyards in Toccoa, make semi-sweet wines by adding less sugar.

This, some experts say, is the future of winemaking in Georgia: embracing our native plants while continuing to innovate and create products with a real sense of place.

This article will appear in our November 2022 issue.