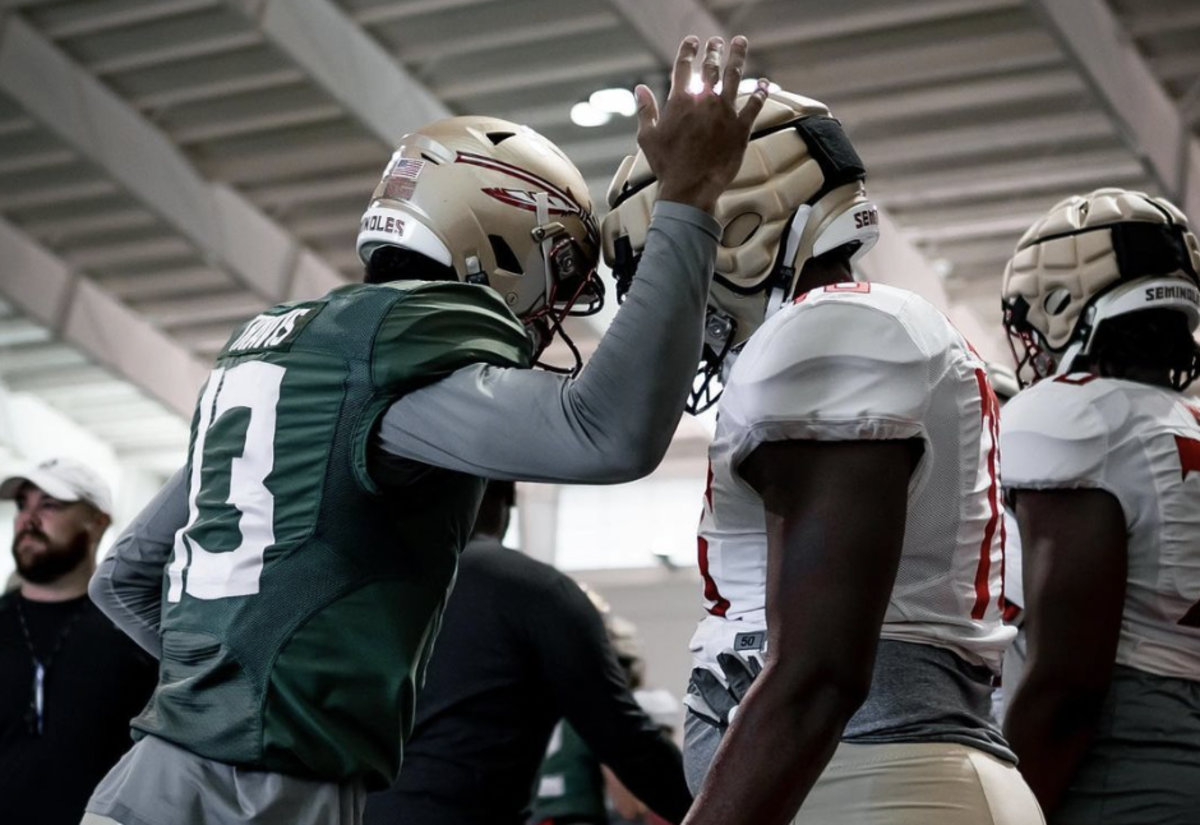 The Seminoles hit the practice fields Monday morning to begin preparations for the Florida Gators a little earlier than normal. With the game scheduled for Friday night, Florida State has one less day to come up with a plan of attack for its batter rival. Despite dealing with cold and windy conditions in Tallahassee, head coach Mike Norvell came out of the day pleased with the execution.

NoleGameday was present at the session and we have listed below some observations from various position groups and players.

– Kicker Ryan Fitzgerald was good from 40 and 46 yards. Backup Aidan Shahriari scored from 40 meters on his lone attempt.

– Florida State began the practice with some red zone work. Quarterback Jordan Travis and tight end Cam McDonald connected on back-to-back passes that resulted in a touchdown. Travis tossed McDonald on a screen before finding him for a wide-open score on the next game. There seemed to be a misunderstanding between the linebackers.

– Quarterback Tate Rodemaker also got an opportunity. On the first game, he pulled the ball with a read option and sliced ​​down the left side for a jumping touchdown.

— Wide receiver Deuce Spann made the catch of the day in 1-on-1s. He ran a route down the touchline and real life freshman quarterback AJ Duffy threw one low. The ball was just short of instep, but he put out a hand to bring it in.

– In team practice, Travis showed his legs, dodging a blazing defender and retreating across opposing court for a decent win on the ground.

– Rodemaker delivered one of the shots of the day with a nice deep ball to wide receiver Kentron Poitier. The pass caught the red shirt in the crotch as a sophomore and he fought his way into the end zone. Poitier had another impressive catch in 1-on-1s, going vertically over his man for six. On the other hand, Rodemaker missed a wide-open downfield from Ontaria Wilson in a 7-on-7, showing the need for consistency.

— Running back Treshaun Ward worked at center for a big win at team practice.

— Campbell bounced off tackle for a solid pickup. Offensive tackle Lloyd Willis worked to seal a defensive end on the rim to free Campbell. Norvell told Willis to stay with the block longer.

– Defensive end Patrick Payton made a fantastic read on an offensive play where Travis rolled out and tried to throw to the back. Payton sat right there on the phone, forcing the quarterback to look elsewhere. The pass sailed high to a target in the end zone.

– Defensive tackle Malcolm Ray forcefully knocked down a pass at the line of scrimmage.

– Linebacker Brendan Gant had a nice stick running back Treshaun Ward between tackles to blow up a running game.

– Linebacker Amari Gainer was involved with a stop on running back from CJ Campbell.

— Defenseman Greedy Vance Jr. played a ball in the air and ended up with an interception in the end zone.

– Defensive tackle Joshua Farmer edged D’Mitri Emmanuel and Maurice Smith off duty to stop an ongoing game before it even started.

– Defensive end Byron Turner Jr. was able to bring Campbell down despite being blocked by an offensive lineman.

– Defensive tackle Fabien Lovett easily got past Emmanuel during 1-on-1s with the offensive line.

– Linebacker Omar Graham Jr. was in position for a pick, but the ball bounced off his hands.

— Speaking of generating revenue, true freshman Sam McCall took the opportunity for a pass down the middle. The ball was behind Duece Spann, who made an impressive adjustment to press the football against his helmet while running to the touchline. McCall got his hands on the ball and snatched it away just before the two went out of play.

Stay at NoleGameday for more Florida State Football coverage throughout the season.