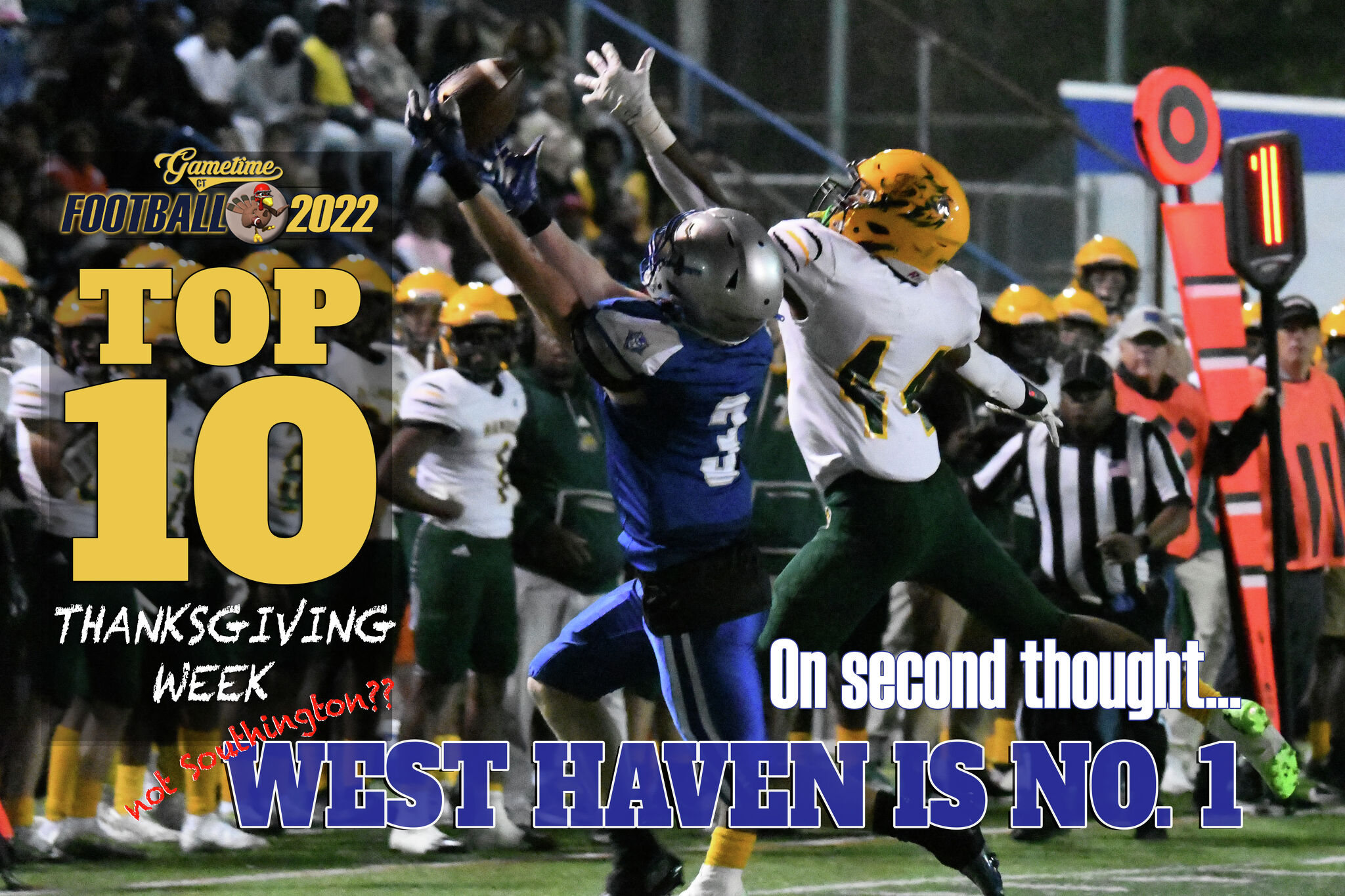 Upon further scrutiny, West Haven is ranked #1 in the GameTimeCT Top 10 poll heading into the final week of the regular season.

Although no one played in the top 10 in Week 11, enough voters reconsidered their positions to reverse the close race between Southington, Greenwich and West Haven. Some have adjusted their ballots at the bottom. Some tweaked near the top and did enough to put the Blue Devils, who will face Fairfield Prep the night before Thanksgiving, above the Blue Knights, who fell by just one spot. Greenwich slips to third place before heading to Staples on Thanksgiving.

West Haven received two first-place votes and led that tally for the second straight week, this time by 12. They came from a former Southington voter and a former Maloney voter. Southington, who meet Cheshire in Thursday’s Apple Valley Classic, stayed in first place with six votes, Greenwich received four and Maloney received one.

(Careful poll watchers will notice one vote less than last week. If that voter’s ballot remained identical to last week’s, the order would not change: West Haven would still lead the rankings, if only by a few points. Southington got first place – Vote there last week.)

The rest of the top 10 remains the same. Maloney, waiting for Platt at the Stoddard Bowl, relegated St. Joseph to fourth despite the gap narrowing between the former No. 1 Spartans and the Hogs, who host Trumbull on Thanksgiving. New Canaan, sixth in the Turkey Bowl in Darien, fell slightly behind St Joseph again but a decent number ahead of seventh Hamden, who will host Notre Dame-West Haven in the Green Bowl.

Ansonia appears to be in 8th place every week this year going into the NVL Showdown with Naugatuck. Staples stayed in 9th place ahead of Newtown, which slightly extended its lead over Berlin in 10th place. The Nighthawks visit Masuk the night before Thanksgiving.

Everyone in the top 10 has already secured a spot in the CIAC playoffs (unofficially, at least; nothing is official until the day after Thanksgiving, as last Friday and the Hartford Public losses reminded us), so these last ones are going Just playing to sit down before the postseason starts on 11/29.

Most of the 30 teams receiving votes this week have secured their place in the 48-team playoffs, although one will not be there: Windsor, whose four losses totaled 13 points, received a vote in 15th place, although it was eliminated from the playoff MM class playoff races.

In this week: Wednesday at Fairfield Prep, 6 p.m

The final result: And nine days later they are number 1. Imagine.

In this week: Thursday in Cheshire, 10am

The final result: It’s been over a decade since the Blue Knights lost their regular-season finals.

In this week: Thursday at Staples, 10 a.m

The final result: A Thanksgiving win could set off a rematch 20 miles later, depending on the points.

The final result: After that first loss of the season, the Spartans will look to continue their recent Thanksgiving advantage over their rivals in Meriden.

The final result: The last time St. Joseph didn’t host at least one playoff game was in 2016, and there just a tiebreaker sent the Hogs to Wolcott. They will also (unofficially) be home on the 29th.

In this week: Thursday in Darien, 10 a.m

The final result: It’s been 10 years since neither New Canaan nor Darien finished in the top 5 in a New Haven Register or GameTimeCT Season ending Top 10 poll. One can imagine that the poll readings will not dampen sentiment on or off the field on Thursday.

In this week: Thursday at Naugatuck, 10 a.m

In this week: Thursday against Greenwich, 10 a.m

The final result: A Thanksgiving win might not set off a rematch 20 miles away, depending on the points, as Staples is no worse than fifth with a win in LL and Greenwich is already no worse than third. Would have been a lot funnier if it worked.

In this week: Wednesday in Masuk, 6 p.m

The final result: The Nighthawks are carrying an eight-game winning streak into Wednesday night, and week one winner Greenwich isn’t lurking on the other side.