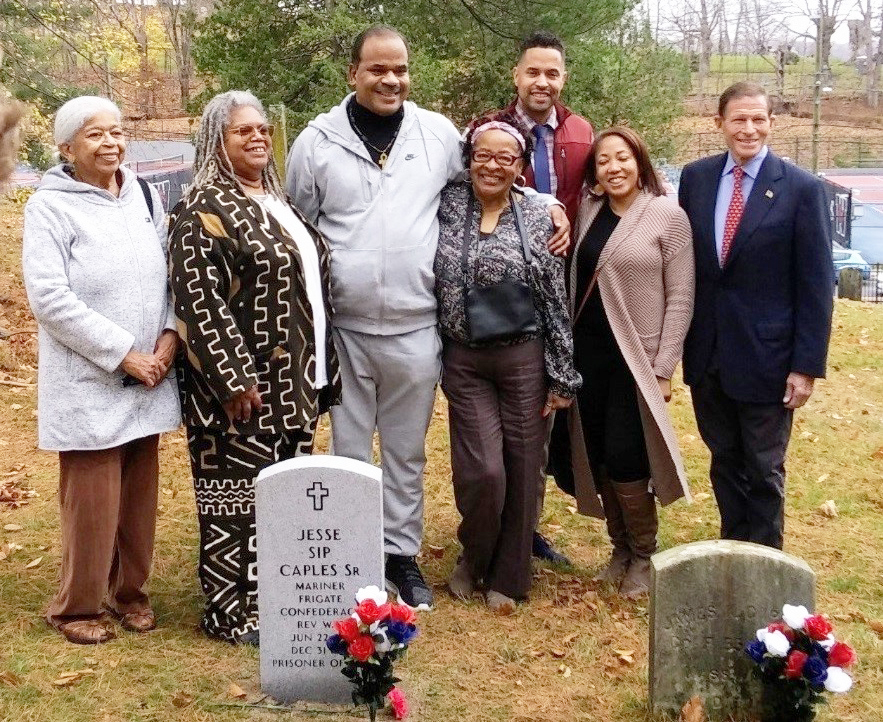 MIDDLETOWN – Middletown’s Jesse Sip Caples, a veteran of the city’s Indigenous African American War of Independence, risked his life and was imprisoned for a time to help the colonies break free from the British Empire.

A member of the Wangunk tribe who lived to be over 100, Caples was born in Middletown in 1743, married three times, and survived two of his wives. He left the world with 10 children.

According to Jesse Nasta, executive director of the Middlesex County Historical Society, no one is really sure if Caples was a free man or a slave.

Earlier this month, the descendants of Caples gathered with representatives from the Greater Middletown Military Museum and others for a ceremony to mark the grave of the man who died in Middletown in 1847. Caples was born in the Washington Street Cemetery across from the Beman Triangle, a neighborhood founded by a black man for other black houses in the same year.

The ceremony took place on Veterans Day. Museum President Kenneth A. McClellan, who served 30 years in the US Army, National Guard and Reserves, said the federal government paid for the grave marker at the site.

The ceremony attracted about 20 observers, including about 10 descendants, said Frank Reese of Bridgeport, who added that Caples is his fourth great-grandfather. Some of those in attendance were cousins ​​of Reese’s who live in Connecticut.

“I was so grateful and so grateful,” Reese said of the effort to erect a grave marker. “It was great and I feel a stronger connection to my ancestors.”

The stone marking Caples’ tomb was placed next to his grandson who fought in the Civil War. Reese also said Caples helped build the ship he was on – the Confederacy – when it was captured by the British.

Caples served in the Confederacy in 1779, which sailed to France to transport an American diplomat and was later captured by the British in 1781, museum records show. He was being held by the British along with other Confederate soldiers on the British ship HMS Jersey. He was eventually paroled in 1782.

In his pension application, Caples wrote: “On our way home in April 1781 we were captured by a British squadron. I was then taken to New York and placed aboard the Jersey prison ship, where I remained until my regular rotation the following month of July, the entire period of my service, which spanned a period of more than two years.”

While Caples fought for his country’s independence, it is unclear if Caples was a free man.

Nasta, a professor of African American Studies at Wesleyan University, said whether Caples was free or enslaved remains a mystery given Caples was a member of a Native American tribe.

At the time of the Revolutionary War, its peak, about 5,000 people were enslaved in Connecticut, Nasta said, adding that slavery began to decline across New England afterward.

More than 200 Connecticut African-American men fought for the Continental Army in the war, Nasta said. Some of these men were free, others were freed for fighting as proxies for their owners.

Connecticut law at the time permitted, but did not require, the release of African-American slaves who fought in this manner, the executive director noted.

There are many “unknowns about his personal history,” Nasta said.

He estimates that Caples has more than 1,000 descendants, including Thirman Milner, mayor of Hartford from 1981 to 1987 and the first African-American community leader to be elected in New England.

Despite some gaps in Caples’ biography, Nasta said, “We need to bring this information (about the contribution of African Americans to the earliest points in American history) to the attention of the public.”

The popular perception may be that New England was a “historically white region,” but in fact “African Americans and Native Americans also shaped Connecticut and New England history… Enslaved people were essential to New England society,” Nasta explained.

Nasta said Caples’ history, which is rooted in Middletown, gives concrete form to issues related to justice and fairness. “It’s not an abstract debate,” he said. “That brings it home. It’s about people who are buried right here and whose ancestors are here in Connecticut. There were hundreds of others who fought in the American Revolution.”

Reese agreed that the public needs to know about the contributions of Caples and other African Americans during the nation’s founding.

“It’s a shame it took 175 years for him to be recognized for his years of service in the Revolutionary War,” Reese said. “Not many people knew about him.”