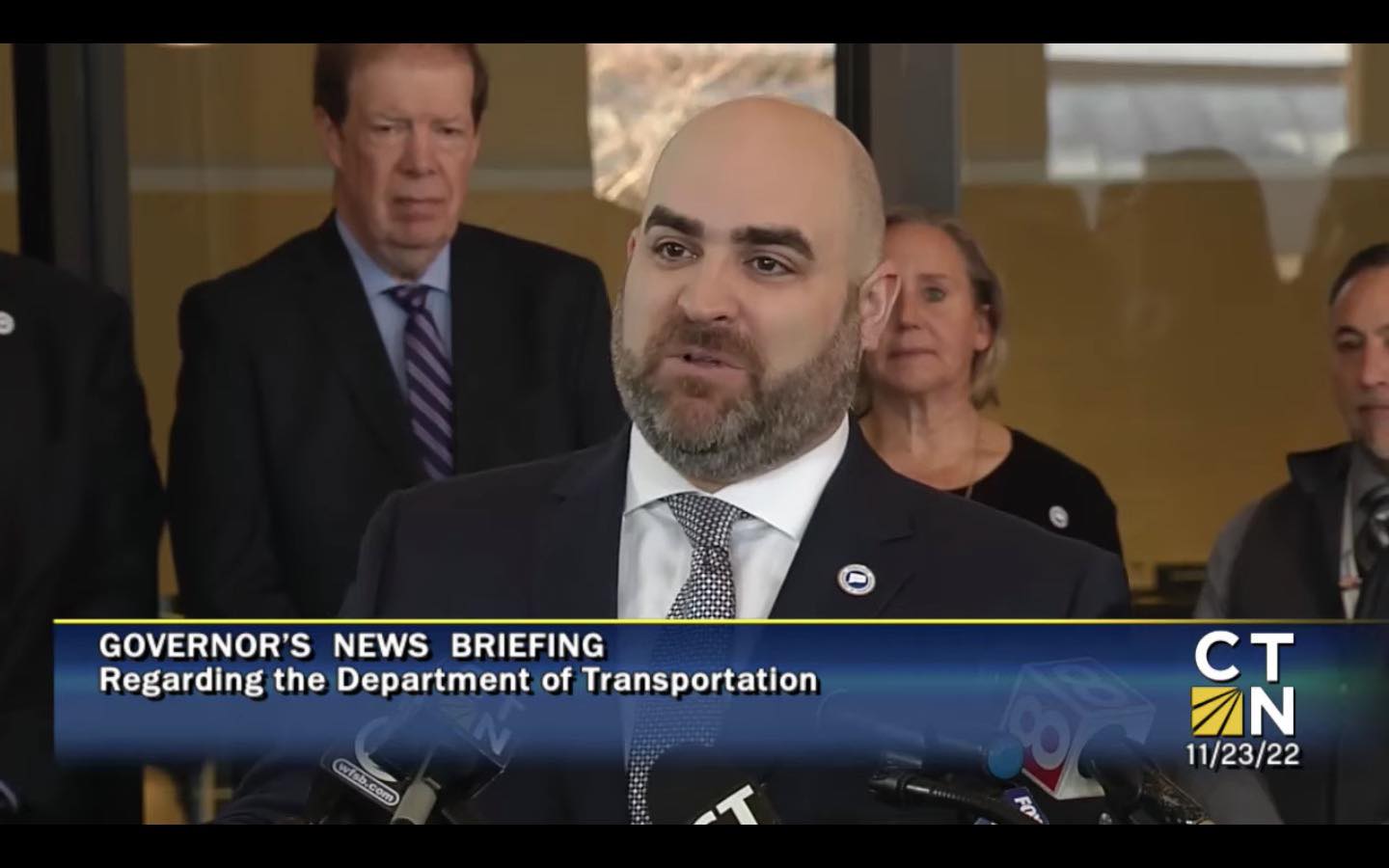 HARTFORD — At a news conference Wednesday at Hartford’s Union Station, Gov. Ned Lamont announced that Transportation Commissioner Joseph Giulietti would step down, leaving it to Garrett Eucalitto to pursue the administration’s safety and sustainability goals with significant additional funding, but a lack of personnel to carry out the work.

“We need to make our transport network safer for everyone who uses our systems, which means that we keep improving our roads, building sidewalks and crosswalks, roundabouts and bike lanes, cleaning up our transport system, making transit easier and more attractive for passengers.” said Eucalitto to the assembled crowd. He has been deputy head of department since 2020.

Eucalitto said that in addition to safety improvements, he would not leave federal money on the table and would continue Gov. Ned Lamont’s mission to improve full-time employment at the department.

“We will get more projects on the road, get more people into good-paying jobs, and include apprenticeship programs that put the next generation on the path to success,” Eucalitto said.

Eucalitto said the department is “in a good place” with staffing but definitely needs to hire more engineers.

“We tapped into, I think, every engineer that works in the state of Connecticut,” he said.

According to a 2021 report by Connecticut Creates, competition from the private sector has been a key challenge in filling transportation engineer positions at the Connecticut Department of Transportation. However, Eucalitto said he will continue with the department’s current recruiting plan — attending job fairs across the tri-state region and recruiting outside of Connecticut.

Eucalitto said the department will repost some job openings and has already started discussions with the national DOT Build America Bureau about how they could use funds from the new infrastructure law — over $2 billion — to hire employees.

In addition to recruiting, Eucalitto said he will focus on the Greater Hartford Mobility Program, improving the rail line through Hartford, removing signals in Middletown and targeting $100 billion in competitive grant money available.

“On behalf of all of you here at DOT, we’re just getting started,” Lamont said.

“On behalf of the people of Connecticut, I can’t thank you enough for everything you’ve done,” Lamont said.

Giulietti, who previously served as Metro-North’s president, took over the job just before COVID began. He told attendees he was proud of his department’s continued service during the pandemic.

“We kept everything going when other states were shutting down,” Giulietti said.

Giulietti said the department’s perseverance has allowed essential workers to keep working and keep the streets clean in inclement weather.

Although his 30-30-30 plan – which called for 30-minute train journeys from Hartford to New Haven, New Haven to Stamford and Stamford to Grand Central – never came to fruition, Giulietti promoted the introduction of electric M8 trains on the Shore Line East during his tenure.

Giulietti thanked Eucalitto and praised his knowledge and experience in transportation.

“My decision to leave the DOT would not have been possible had I not known that Garrett Eucalitto is here to step up and step in,” Giulietti said. “No one is more passionate and committed to transportation, justice, inclusion and road safety than Garrett.”

Prior to the announcement, State Rep. Devin Carney, R-Old Lyme, told CT Examiner that as a senior member of the Transportation Committee, he has nothing but positive things to say about his work with Giulietti, even if they don’t always agree on politics.

“Hopefully,” Carney said, his successor would “bring with the same open-mindedness and availability that characterized Commissioner Giulietti’s tenure.”

State Senator Will Haskell, D-Westport, told the CT Examiner that Giulietti exceeded his wildest hopes in his role as commissioner.

Haskell, chairman of the Transportation Committee, said he was delighted to learn that Giuletti had previously worked as a conductor on the New Haven Line and the New Canaan Branch, both in his district.

“Joe knows every one of these points along the line like the back of his hand, and that just makes him an asset to the entire Connecticut Department of Transportation and the entire state,” Haskell said.

“I literally traveled the state with Garrett to see first-hand the improvements that DOT has made, is making, and plans to make,” Haskell said. “And I couldn’t be more excited about the vision he has for the future.”