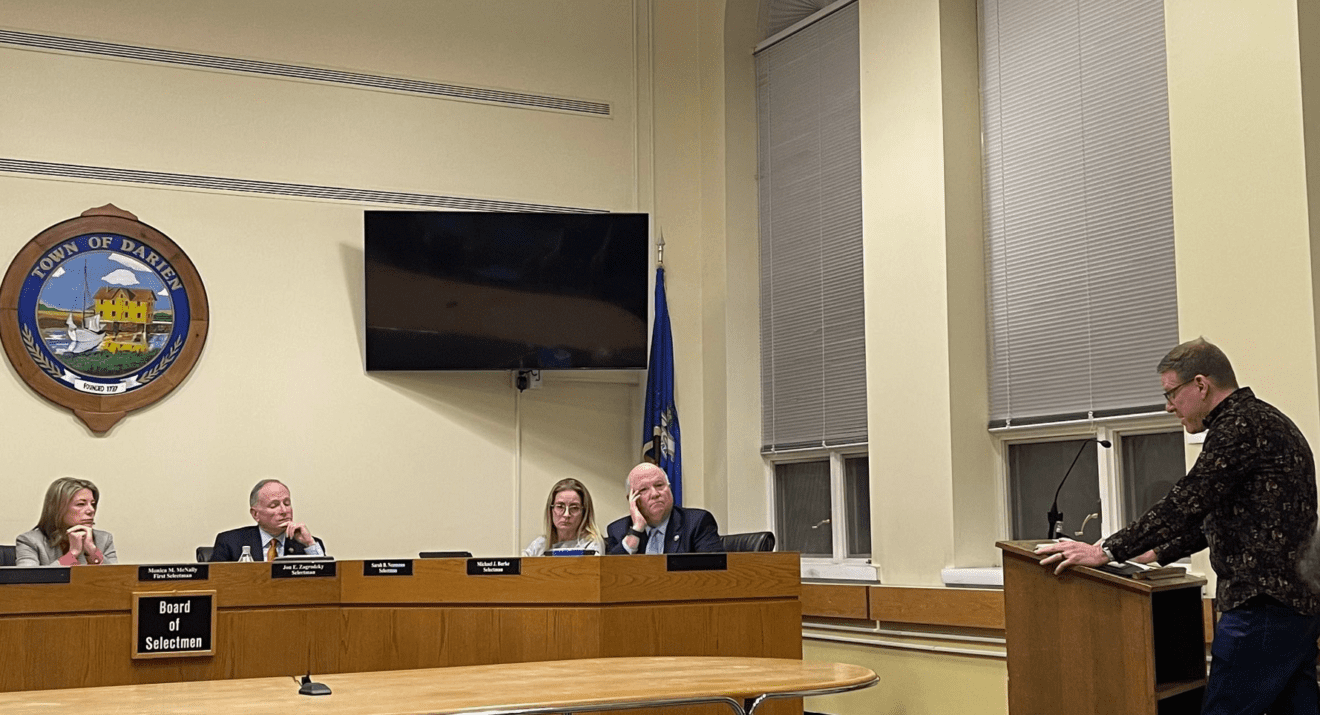 DARIEN — After a three-month delay and heated discussions, the Board of Selectmen voted Monday night to ban the flying of all but the federal, state and city flags on municipal flagpoles. The decision came despite opposition from members of the LGBTQ community.

In August, the proposed flag-show policy, which would replace ad hoc board decision-making, drew a large crowd of opposed Darien Pride members to City Hall, but at Monday’s session, Democratic MPs led Michael Burke and Sarah Neumann are pursuing charges, instead proposing a policy that would allow residents to request flag-raising.

“It’s just weak to pass the buck and have a total ban,” Burke said. “It eliminates the conversation forever.”

Burke acknowledged that voting on flag submissions could present legal issues and take up session time, but suggested the policy could be amended later if necessary. Burke said if the board passed the proposed policy, it would eliminate the opportunity for statements of support.

“We cannot allow ourselves to say that raising a flag in front of City Hall is the only way or the best way,” Zagrodzky said.

Zagrodzky said there is no better way to demonstrate acceptance and inclusivity than officials joining the community at citywide events and residents raising flags outside their homes like last year’s Pride Month.

“With all due respect, to think about what goes on a single flagpole in front of City Hall or a flagpole on the beach compared to what I just described seems frankly trivial and almost offensive,” Zagrodzky said.

Neumann replied that she did not find the conversation trivial at all and that it was important to hear what residents wanted.

Burke asked Zagrodsky why the board couldn’t allow flag requests aside from supporting the community at events.

Before the debate, attorney Wayne Fox summarized the Supreme Court case — Shurtleff v. Boston — in which a Christian group sued the city of Boston for refusing to fly its flag on a city pole because Boston had previously used other secular flags had allowed. Fox said if the city allowed residents to propose flags, he expects there would be numerous flag filings and lawsuits.

Minnick said that looking at the list of requests, she was uncomfortable voting on any of those flags and potentially disparaging a group of people.

“Would I hurt anyone? Would I marginalize anyone over this vote? I don’t think that’s my job as a chosen one,” Minnick said. “My job as a Selectman is to be the voice, to get out there and support them at community events.”

Burke instead argued that it was within the board’s right to decide that a flag was too political and to reject submissions. Both Burke and Neumann said the board is made up of an intelligent group of people who can make those decisions.

“Politics is about choices,” Burke said. “And this is about the choice, do we do something active and use our intellectual abilities, or do we make the simple decision and just say, ‘Those three flags.'”

McNally said it wasn’t an easy choice and she wasn’t happy with Burke’s characterization of the debate. She said that all board members make their decisions carefully.

“Personally, I think the Darien flag, the Connecticut flag and the American flag cover everyone in our community,” McNally said. “Every single person is represented under these flags.”

The Board of Selectmen then voted down to approve the policy, by three votes in favor and Burke and Neumann against.

Dan Guller, chairman of the city’s Pride committee, told CT Examiner that the meeting didn’t go as he had hoped, but the vote was not unexpected.

Guller said there are many city guidelines that don’t apply to everyone. For example, he said, only seniors have free beach passes, schools are closed on Rosh Hashanah, and city hall is closed at Christmas.

Guller said residents showed their support for LGBTQ youth by raising flags and putting up yard signs and it was a shame the city government wouldn’t do the same.