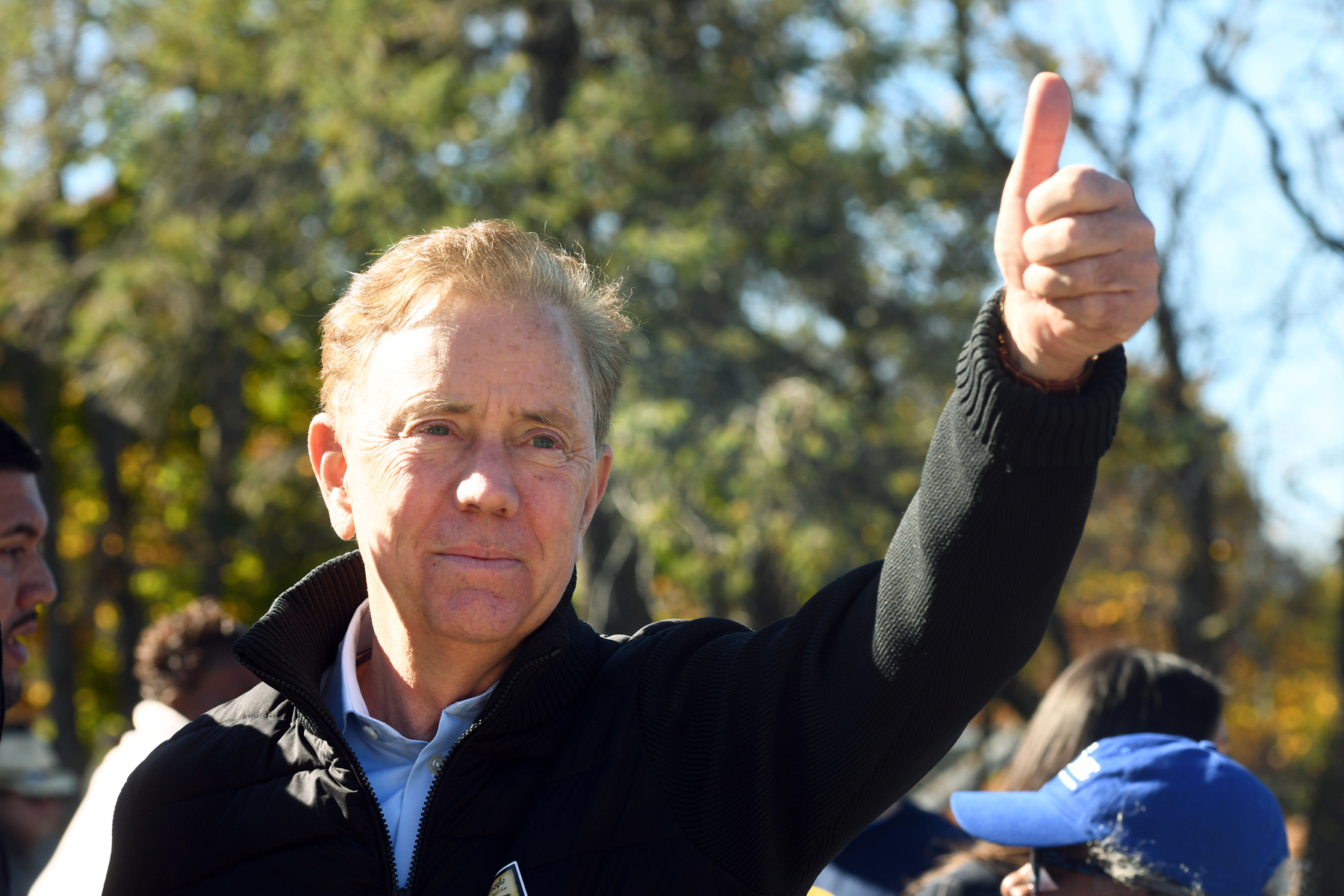 Gov. Ned Lamont’s administration chose a railroad station Wednesday to bid farewell to Joseph J. Giulietti, the railroad worker lured out of retirement to head the Department of Transportation four years ago, and his choice of a successor, Garrett Eucalitto, to confirm.

Giulietti, 70, who joined the railroad as a 19-year-old Penn Central conductor and left the industry as president of the Metro North mass transit system, only laughed when he was interrupted by the announcement of a train arriving at Union Station in Hartford.

The press conference formalized what had been set for months: Giulietti will step down as commissioner in December, and Lamont intends to nominate his respected deputy, Eucalitto, to lead ConnDOT at a crucial juncture in America’s highway and mass transit rebuilding.

Federal transportation is at an all-time high and is available to Connecticut through formula and competition grants. Almost all of the state’s rail improvement priorities were included in the $24 billion approved for the Northeast Rail Corridor.

But the DOT’s engineers are understaffed, the state has to fund it, and the construction industry has long complained that Connecticut’s infrastructure progress is slow.

Eucalitto, 41, who grew up in Torrington and lives in New Haven, is an exit commissioner, neither a highway engineer nor a traffic controller. He’s a self-proclaimed politics nerd, schooled in the complexities of how best to fund huge infrastructure projects and how to assess their impact on commuting and living in Connecticut.

“My decision to leave the DOT would not have been possible had I not known that Garrett Eucalitto is here to step up and step in,” Giulietti said. “No one is more passionate and committed to transportation, justice, inclusion and road safety than Garrett.”

Eucalitto had an unsatisfactory stint as underutilized Undersecretary for Planning and Interstate Policy in the Office of Policy and Management, where he led research and development initiatives in transportation, environment, and regional planning for Governor Dannel P. Malloy’s administration.

He left OPM in 2017 to become the director of transportation for the National Governors Association in Washington, where he previously served as a policy advisor to US Senator Joseph Lieberman. Eucalitto said he had no intention of returning to Hartford until he was approached by Giulietti in late 2019.

Eucalitto was hired as Deputy Commissioner in January 2020.

“I thought Garrett had a really decent resume,” Lamont said. Then he smiled and glanced sideways at Eucalitto. “Worked for Joe Lieberman, Dan Malloy. What could go wrong with that?”

Lamont lost a Senate race to Lieberman in 2006 and a gubernatorial primary to Malloy in 2010.

“We need to make our transport network safer for everyone using our systems, which means we keep improving our roads, building sidewalks and crosswalks, roundabouts and bike lanes, cleaning up our transport system – making transit easier and more attractive for passengers.” said Eucalitto.

Rep. Cristin McCarthy Vahey, D-Fairfield, the co-chair of the Legislature’s Transportation Committee, said she regretted that Eucalitto left OPM in 2017 and was thrilled when Giulietti brought him back as his deputy in 2020. She called him a large picture “system thinker”.

Giulietti hired him in part for his expertise in transportation finance. Connecticut is one of the few states that relies entirely on government bonds to finance transportation infrastructure, and foregoes competitive federal loan programs such as TIFIA, the Transportation Infrastructure Finance and Innovation Act.

TIFIA loans require special revenue streams, but they’re cheap and can be repaid over a period of up to 75 years, a reasonable amount of time for financing large railroad bridges that will see service for a century, Eucalitto said.

In the last budget, the General Assembly approved the administration’s proposal to create 206 new positions for the DOT, many of which will go to an office for innovative finance. About 150 have been filled, he said.

Connecticut abolished freeway tolls in the 1980s, and Lamont failed to bring them back in 2019 to stabilize a near-bankrupt special transportation fund that relies on gasoline taxes and a cut of the sales tax. A highway use tax for trucks, coming into effect in January, will provide a new source of funding.

Lamont and Eucalitto each responded quickly and succinctly when asked if the administration would reassess tolls. Everyone said, “No.”

However, Eucalitto added that any state that relies on gasoline taxes will need to find other revenue streams 20 years from now as electric vehicles become the norm.

To help consumers cope with soaring gas prices, the state suspended its 25-cent-a-gallon gasoline tax from April through December 1, costing about $30 million a month in lost revenue. Next week, the General Assembly is expected to hold a special session to pass legislation that refunds a nickel each month until the full 25 cents are reinstated.

The state compensated for the difference with pandemic aid from the federal government and the additional revenue from a price-sensitive gross income tax on fuel. But Lamont said the state cannot afford the gas tax holiday indefinitely.

“I’m quite sensitive about the Special Transportation Fund, especially given where we were four years ago and given the increased demands,” Lamont said. “With all that extra money coming in from federal agencies, we still have to contribute 20, 30, 40 percent depending on the competitive grant.”

Donald Shubert, the president of the Connecticut Construction Industries Association, said Eucalitto is well positioned to take on the DOT.

“I’ve known him since he started in transportation with Sen. Lieberman two decades ago, and he’s worked diligently toward it throughout his career,” Shubert said.

The DOT currently has 700 open positions and competes for engineers and other skilled workers in a tight job market.

“We definitely need more engineers. We tapped into, I think, every engineer that works in the state of Connecticut,” Eucalitto said. “We now also go to job fairs throughout the border triangle.”

In the past, hiring has been slowed by the involvement of two other agencies, the Department of Administrative Services and the Office of Policy and Management.

According to Eucalitto, the process has improved because DAS is quick to post vacancies.

“Compared to my time at OPM, it’s day and night. There’s a much better relationship between our sister agencies,” he said.