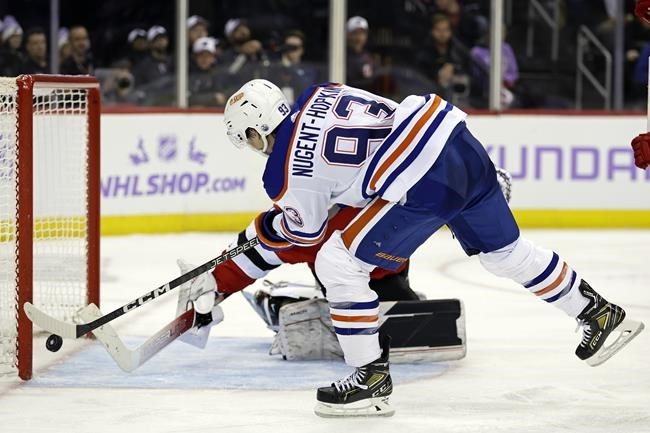 Nico Hischier had three assists and the unnamed Devils defeated the Connor McDavid-led Edmonton Oilers 5-2 on Monday night to set a franchise mark with their 13th straight win.

“I think we’re up there with the history book,” Hischier said. “Nobody will take that away from us now and it feels good. It proves that we are a good team, that we can win hockey games, that we don’t have to hide anymore.”

Jesper Bratt, Dawson Mercer, Damon Severson, Tomas Tatar and Yegor Sharangovich scored for the Devils, who are unbeaten against Washington since October 24. Vitek Vanecek made 27 saves for New Jersey.

“It’s great to win,” said Bratt, who leads the team with 24 points. “So does everything to do with the rink and being with the boys and playing those important games. That means a lot, and winning is the best thing that hockey can do. ”

The Devils have three quarters of the season left, but they’re on track to make the playoffs for the first time since the 2017-18 season.

“We had a great run. We know we’re kind of being hunted now,” said coach Lindy Ruff. “We know we’re probably expecting the best that any team can bring because we’re getting recognition. So that’s the part we need to deal with. But after 19 games you can’t say, ‘We sent a message to the league.'”

Leon Draisaitl and Ryan Nugent-Hopkins scored for the Oilers, who were beaten twice by New Jersey during their run. Stuart Skinner made 23 saves but was taken off the bat by Hischier with the puck early in the second period to put Mercer’s opener into a wide-open net.

“Obviously a difficult game. Tough loss,” Skinner said. “They are obviously a great team. You’re obviously hot right now too. They have some great players making great plays and it was just hard to lose, especially against these guys twice in a row. But we can only learn from our mistakes and move on.”

Minutes later, Severson extended the lead to 3:1 on a counterattack.

Edmonton made a push early in the third. Nugent-Hopkins cut 4:52 to 3:2 and had a narrow chance to equalize only to be stopped by Vanecek who improved to 9:1.

Tatar gave the Devils breathing room about a minute later, muffling the rebound of Mercer’s shot and punching Skinner. Sharangovich added an insurance goal with 5:15 left.

Jack Hughes had two assists for the Devils.

ROUGH NIGHT ON THE NETWORK

Not only did Skinner give the Devils the go-ahead goal, backup netkeeper Jack Campbell also had a bad night.

Campbell sat on the bench end late in the second half and was cut when he was hit in the face by a puck that appeared to be deflected off Devils defenseman Dougie Hamilton. Campbell left the bench immediately and did not return for the third period.

“I went and saw him after the second period and he was laughing and smiling. So that’s the kind of guy he is,” Skinner said. “But no, he had quite a bloody nose and obviously it’s hard to see that happening, especially for him. I think he’s fine.”

Oilers: Continue their momentum through the New York metro area as they visit the Islanders on Wednesday. Edmonton ends Saturday in New York City against Rangers.